Imperial Hive World of Necromunda offers a different perspective on the endless strife of the 41st Millenium. Instead of the galactic tug-of-war between Space Marine chapters and legions of Xenos, here we have low-key gang warfare inside the dystopian industrial underbelly of the Imperium. All those bolters and lasguns needed for the billions of Guardsmen are made on those Hive Worlds, deep below the rarely seen surface that most bottom-dwellers consider a myth. Necromundians live and breathe outside the Inquisition’s strict jurisdiction and watchful eye, surviving inside dilapidated factory domes and miles upon miles of the rusted ore processing machinery. Their iron world is bound by toil, sweat, and random violence, without the noble drama of fighting and dying for the Emperor. The universe of Warhammer 40K is a very harsh place even on its best days, but Necromunda offers an extra layer of desperation on top of all that harshness. 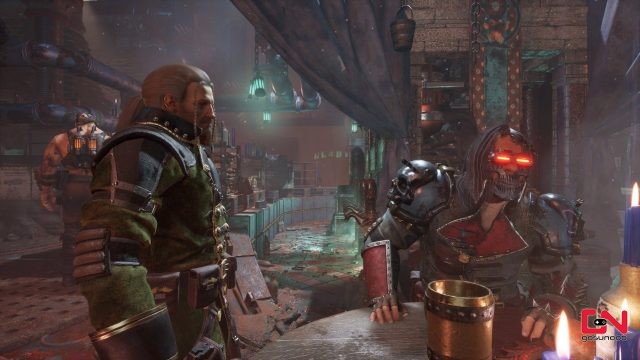 Outside of the tabletop scene, Necromunda started to emerge only recently as the setting for PC, console, and even mobile games, but most of the games so far were abysmally bad – Hired Gun might be the first Necromunda title deserving a nod. This first-person shooter with a progression system offers pretty solid, old-school shooting action, linear campaign with plenty of random side missions, but sadly, it lacks multiplayer and a meaningful story.

In Necromunda: Hired Gun, you play as a bounty hunter who had bitten more than he could chew, taking a contract that wiped out his team and almost ended his career. Rescued from the battlefield by the colleague with (possible) ulterior motives, our hero is patched with bionic augments and made ready for the combat again. The story starts on solid ground but quickly deteriorates into disjointed, random assaults on various underhive gang hideouts, having you chasing the elusive target that you don’t really care about. By the end of the campaign, I mainly had forgotten the point of it all, going through the motions of ever crazier action toward an explosive conclusion. But perhaps is pointless to demand a flashed-out story and impeccable characterization from the game that looks like the mutated child of Painkiller and Doom and aspires to be nothing more than that? 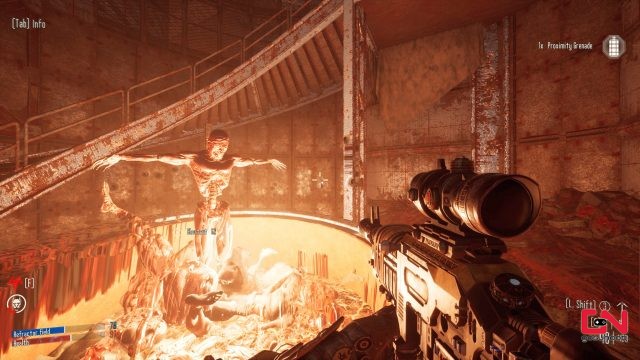 True to its tabletop roots, Necromunda: Hired Gun offers a third dimension aplenty. It has complex levels with verticality as a design feature, not an occasional twist. Navigating the giant industrial mazes is a breeze as you can practically move like Bionic Commando or Spider-Man lite, double jumping, wall-running, and hook-grappling on platforms. This speedy, nimble protagonist stands as a polar opposite of the bulky Space Marines from Space Hulk Deathwing, Streumon studio’s previous WH40 title. You must keep moving to survive as you can’t depend on a small refractor shield and almost non-existing armor.

You start equipped with a revolver, but pretty soon, you’ll amass a vast and diverse arsenal of weapons that look suspiciously like real-world firearms, even if you’ll stumble upon an occasional Plasma gun to remind you that this is still WH40K. Assault rifles, submachine guns, shotguns, grenade launchers, and other weapons can be augmented with various attachments between missions. Every firearm and any other piece of loot comes in different quality, and after the mission, you get to decide which one(s) you want to keep or sell for credits. 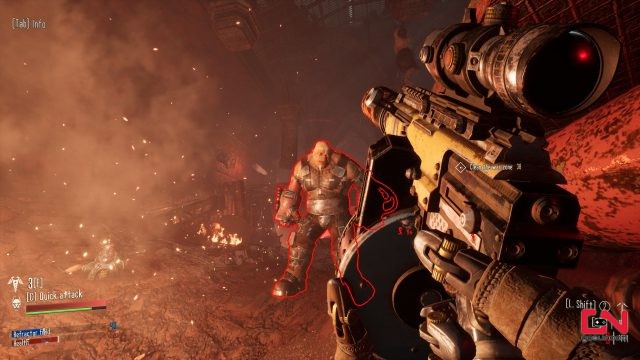 Gunplay is solid, weapons feel meaty, opponents are dumb, but they are legion… Apart from weapons, you can use insta-kill when a human-sized enemy enters close range, and you can also rely on various powers with relatively short cooldowns. Last but not least, you can summon a trusty Mastiff who can pin enemies to the ground or draw fire for a short while, enabling you to dance around and dispatch every foe in the vicinity. Combat gets crazier as the campaign progresses, facing you with deadlier gangers, mutants, and other nasty stuff – I’m pretty sure I had fought Tyranids on one occasion, even if the game never explicitly stated it. The real highlight is bosses, bullet sponges with creative moves, and a tendency to spawn help that’ll strain you to the limit. 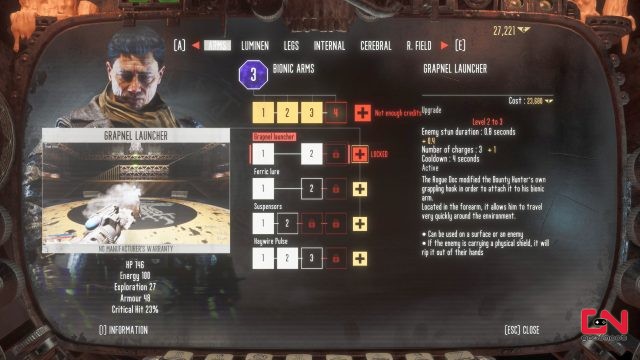 The progression system relies on the money you automatically claim from the unwanted loot at the end of each mission. There are several talent trees with passive and active abilities, but the game is not revolving around „builds“ or any sophisticated min/maxing. If you tackle optional missions and grind some extra credits, you could eventually complete every branch of the talent tree. The same goes for your Mastiff, but it shouldn’t be your upgrading priority because of the bugs rendering it unreliable in the field. He cannot traverse obstacles or climb the terrain, and it tends to freeze in place when it cannot reach any target. Here’s hoping for a patch that would address that.

Necromunda: Hired Gun is the first game that made my RTX 3080 sweat bullets on max settings in 1440p resolution. The game looks absolutely crazy, and big firefights tend to fire up the system even more than Ethereum mining. This is by far the most beautiful Warhammer 40K game in existence, and it will remain so in the foreseeable future. 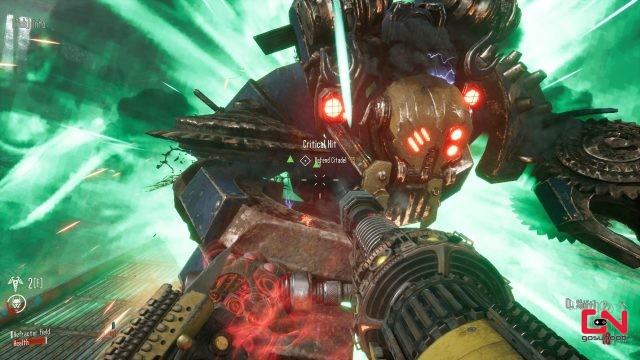 Let us summarize, shall we? If you yearn for some solid, even occasionally spectacular old-school shooting action, you can’t go wrong with Necromunda: Hired Gun. Just don’t expect to be amazed by the story.