If you exist in a pre-millennial cultural plane, you might not know about the most successful manga of all time. The numbers that One Piece made in a quarter of a century since its inception are mind-blowing, making it one of the highest-grossing media franchises in history. The popularity of manga, in general, is on a constant upward trajectory, partly due to western artists’ obnoxious obsession with progressive agendas. Manga makes far, far more money than the combined western output of DC, Marvel, and the rest, at least in the raw volume sold.

Adventures of Monkey D. Luffy and his Straw Hat Pirates are ruling the anime sphere, too. The mountain of more than a thousand episodes is almost insurmountable for newly minted fans, eager to consume everything related to it. If you want to truly KNOW the One Piece, be prepared to submit to the exclusivity of the experience. You will hardly have time for anything else.

Familiarity is Not Optional 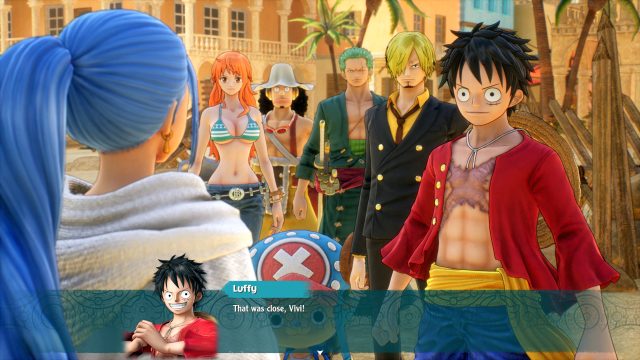 That voluptuous baggage train of content is both blessing and a curse for One Piece video games. They are, without exception, fan service products, aimed at long-time enjoyers. If you don’t have a clue about the Straw Hat gang, or even if you have only limited experience with their adventures, One Piece games are not for you. That goes double or even triple for One Piece Odyssey, a turn-based JRPG molded around some of Straw Hats’ greatest hits.

Odyssey begins with The Thousand Sunny and her crew marooned on some mysterious island. After handling some dangerous local fauna, Luffy, Zoro, Usopp, Sanji, Nami, Chopper and the rest make contact with two enigmatic strangers. One of those is Lim, a pirate-hating girl with the ability to strip people of combat powers just by touching them. Before they had the chance to point out that they are, in fact, good kind of pirates, Straws got insta-nerfed. So begins the long quest of getting their might back, mostly via exploring Memoriae, sort of past-parallel dimensions, where the gang can relieve their historical adventures. 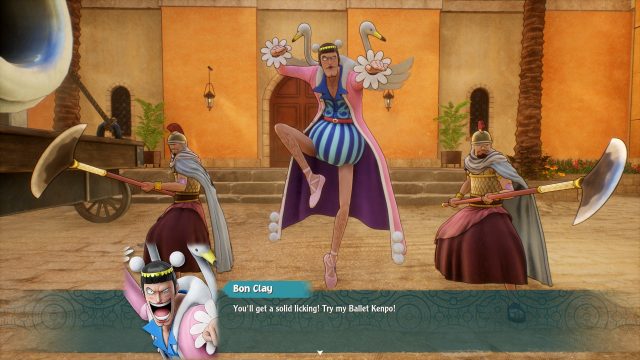 One Piece Odyssey is mostly a typical JRPG, with all the usual flaws and strengths. Chief among them is the banality of the initial few hours, during which you will hardly break a sweat. The total linearity of the introductory experience, combined with the absolute lack of any challenge, can and will put you off. But if you stick around for a dozen hours, a modest requirement for any JRPG worth its salt, things will gradually improve. Your options will expand in every sense, allowing you to truly lose yourself in the One Piece mythos.

As I said before, most of the adventuring is constructed around relieving the past glory. First Memoria is related to the Alabasta story arc, where the gang has to save the kingdom and defeat the Crocodile, perhaps their most famous foe. Each big story in the game is, of course, massively compressed and approximated in places, but the general idea and major characters are the same. Expect a ton of dialogue and an absolutely insane amount of in-engine cut scenes. And combat. Lots of combat. 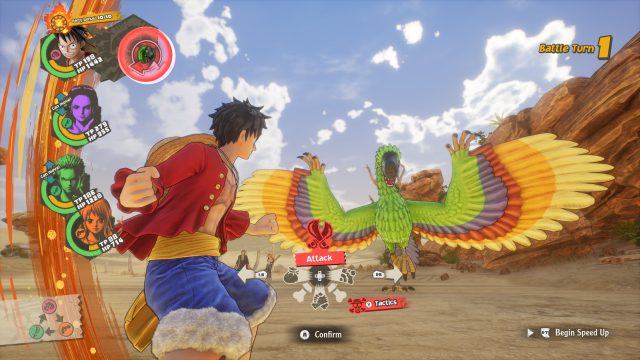 Combat is turn-based and brings faithful representation of the strengths and abilities of each Straw Hat. Luffy’s rubbery limbs, Zoro’s katanas, Usopp’s slingshot, and hammers, and the rest fit comfortably into the established lore. The developer split the abilities and attacks into several types, facilitating the tactical approach to combat. For example, power-based characters, like Luffy have the advantage over speed-based mobs. But the technique-specced heroes, such as Zoro, fare worse facing the speed ones. You can mostly ignore those rules, save for a few boss fights, but even there, you can compensate for lack of efficiency with consumables. Those are abundant, and besides crafting, there are plenty of vendors for topping up the supply.

Every encounter is initially segmented into zones, each involving one or more Straws and up to four enemies. The tactics I found most useful is the herding of foes using specific attacks like Luffy’s Gum-Gum Bazooka and just AoEing the shit out of everyone. Besides normal attacks, every hero can use specials, spending TP (Tension Points). Those works like mana, and you can replenish them by using regular attacks or consumables. Save for the boss fights, careful TP management is not essential.

Big, Beautiful, and Voiced in Japanese Only 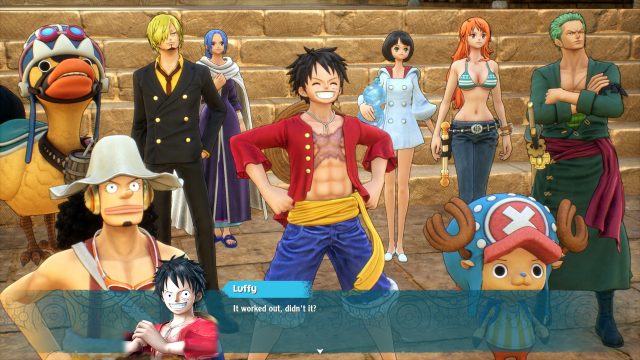 One Piece Odyssey is the best-looking One Piece game, no question about that. If you watch One Piece anime, you will have a hard time returning to it after getting spoiled by the game. The abundance of cutscenes forced the developers to forego all other voiceovers except Japanese. For a game with this much dialogue, it would be massively impractical to implement any kind of linguistical diversity except for subtitles.

One Piece Odyssey is a roller-coaster of the best stuff that manga and anime offered over the last couple of decades. It has vast, expansive zones full of discoverable stuff, zillions of NPCs, millions of cutscenes, and an abundance of combat. The plot is often wacky and sometimes incoherent, but that’s One Piece DNA. In order to fully appreciate it, you need to have intermediate to advanced familiarity with the source material. If you don’t know the characters, their relations, and their mutual history by heart, everything the game has to offer will ring hollow. But if you are, you are in for a real treat.

If you’re looking for the answers to the February 2023 AFK Arena Poetic Pop Quiz,…

Hogwarts Legacy is the upcoming open-world game set in the Harry Potter universe, roughly a…