After dozen hours of constant headbuttin’ against the wall and minimal progress, I was beginning to doubt a lot of stuff, but mostly my neuro-motoric skills. The next stage was regret over purchasing PlayStation 5 in the first place and investing my time in this @#$%! game. Cost in both goodwill and patience was pretty significant at this point, not to mention several close shaves during the ragequit episodes regarding the (aborted) launching of the DualSense into the TV, the only innocent party in this debacle. I had steeled myself, fortunately, deciding that Returnal will not be the game to break me. I will break Returnal – I can’t really do anything else during the 3rd lockdown, so I might as well die trying to make a dent in it. 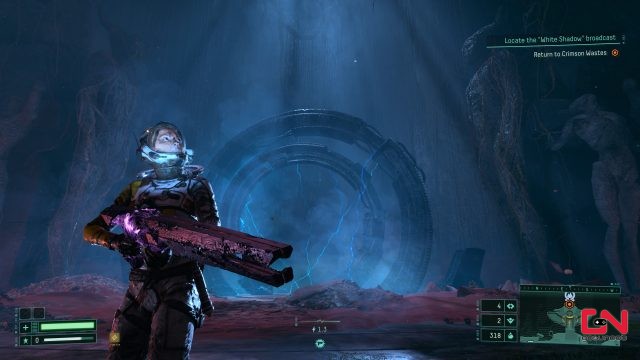 On and on, I had waded through this deep, hard-core, immensely difficult quagmire. Who, exactly, is the target audience for this game? Spider-Man? That Blevins Ninja guy? Or maybe meta-human Dark Souls streamers who manage to complete the game naked without suffering a single hit. I’m not a space marine, just a lifelong gamer with solid reflexes, a minimal backlog of unfinished games, and a family which most certainly doesn’t benefit from my outbursts in front of the TV. Before I experienced Returnal, I enjoyed and completed a lot of hard-core games. Soulsborne landscape is practically my playground. Why is this one giving me so much trouble?

Hardship stimulates advancement, which in turn invokes respect for both yourself and the harsh teacher. The acceptance stage of the grief ladder came like a chocolate tsunami, unexpected but welcome. I had finally managed to beat the second of six bosses, paving the way for mid-game I expected to be challenging but doable with my renewed confidence. I realized that Returnal represents the very next level some scholars theorized about, the AAA game that actively dismisses an essential element of blockbuster games – broad appeal. Returnal is a high-end pariah of the previously unheard sort, content with its twisted state of being, serene in the mockery of our expectations. Hard, sexy, and cold, like that girl everyone said that was way out of your league. 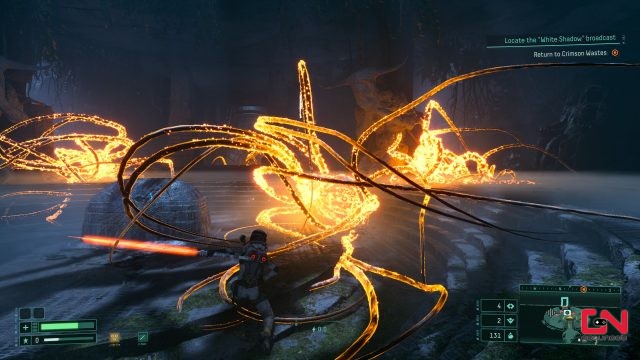 Returnal is also a strong rebuke of the popular slanderous theory that Sony became obsessed with the biggest exclusive franchises, unwilling to risk innovation. The risk that Returnal represents is big as they come. Being the first PlayStation 5 exclusive that came out since launch, Returnal will most certainly be picked up by few million owners of that still scarce, dreamy-white console. I suspect that 90% of customers will climb the grief ladder I had almost died on, screaming bloody murder all the way and wishing the goriest possible death to its developers. Such is the price of being first to tread terra incognita.

So, Returnal, what the hell is it anyway? Roguelike 3rd person bullet-hell shooter hybridized with survival horror and elements of a hard-SF narrative adventure. You play as Selene, space scout slash scientist who defied the ban and approached the mysterious planet Atropos, only to crash land on it. The beginning is very vague, and answers are scarce, even after spending considerable time with the game. Selene is determined to find the source of the peculiar signal emanating from the ruins of the long-extinct alien civilization but not quite ready for the weird horror that lies ahead. 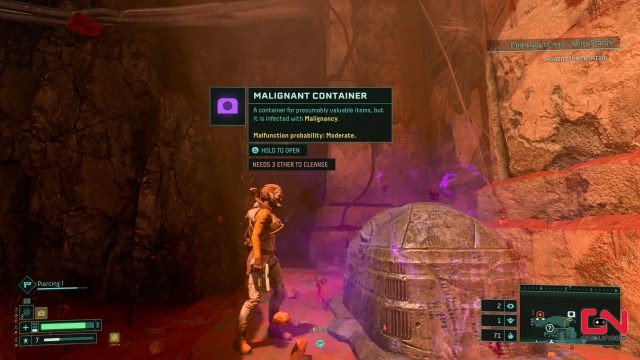 During the first foray into the green, she stumbled upon herself – Selene 2.0 was dead, lying in the grass, gripping the sidearm that Selene 1.0 was presumed lost in the crash. She found some more traces of her past selves, mainly in the form of audio logs, full of ad-hoc analysis of the cyclic nature of Atropos and unknown, hostile fauna that pops up from nowhere. Before long, our Selene gets jumped by tentacled horrors who look like a crossbreed of spermatozoa and sentinel squid from the Matrix trilogy and dies. Everything resets and starts from scratch.

This is the first of many, many rewinds you’ll experience in Returnal. The next Selene, or initial Selene, depending on how you look at things, crash lands on Atropos, visibly confused but with the general realization that she is stuck inside a time loop. Onward she must go, driven to find the source of that signal, determined that she does better this time. Sweet summer child, our Selene is.

Even compared to niche, indie roguelikes with a small audience and nothing to lose, Returnal is far more cruel and unforgiving. Unsuccessful run yields nothing as upgrades are strictly tied to the pivotal moments in the story, mainly boss kills. With each death, the layout of levels, comprised of series of mini-arenas, changes, forcing you to navigate different terrain on every try. There are six biomes here, each one with its boss, enemies, and all sorts of hazards. Bosses do stay dead once you dispose of them, but the placement and number of mobs also fall under a cruel RNG. In most games, losing several hours of progress is considered abnormal; here, it’s expected. Routine. 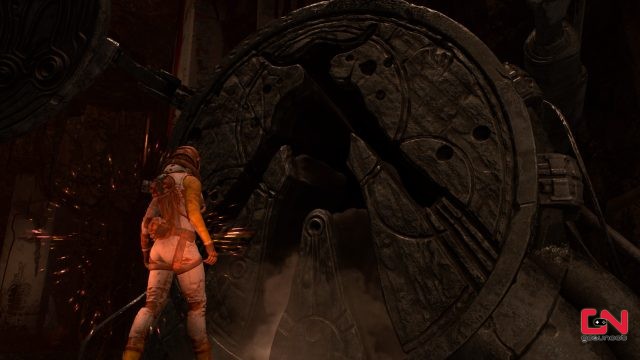 The easiest thing to do in Returnal is to die. Mobs, mini and full-size bosses usually spew a lot of shiny but deadly stuff your way, forcing you to dance around like gunship in Ikaruga. The key to survival is mobility. Selene is fast by default, even faster when running and jumping; Dashing is on a short cooldown, giving you split-second immunity to most damage. By default, you have one life, but you can invest the resource currency dropped by most enemies into purchasing the thingy that gives you an extra life, provided that automatic vendor has it on offer. Then there is Ether, the scarce resource that persists through death, which can be used to pay for the single resurrection. For that to happen, you’ll need to find the corresponding rez room and invest six pieces of Ether, which is not affordable on most runs. So, for all practical purposes, you live once, and then you have to try all over again, with zero bonuses, with a starting weapon, facing the new layout. It can be disheartening. Or very rewarding, depending on your state of mind, body, and will.

Besides killing and dying, there is also a part when you uncover the mystery layer of your adventure, delving in yours and the history of your family and the past of the long-dead aliens who had built all those ruins. Visually, there is not a molecule of doubt that this is a proper, beautiful next-gen game – 4K,60 FPS, super heavy levels of beautiful details, this is the game that is destined to be admired, like Chriss Foss painting that came to life. 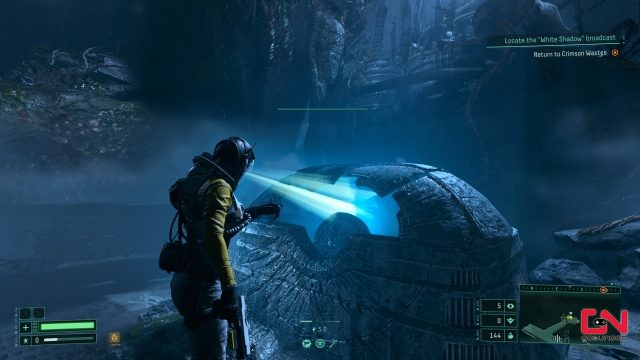 Returnal does not provide casual, entertaining escapism for the working-class players, who wish to unwind in front of the TV after a hard day of grinding gears. Those guys will be swallowed, spat out, and inevitably demoralized. Like a demanding mistress, this game asks the very best you – if you are not fresh, focused, and full of diamond-hard resolve, you can expect to waste time and effort with nothing to show for it. But if you are good, alert, sober, and ready, there is a game that can offer a real, combat introspection. If you persist and beat Returnal, no matter how long it takes, you are an elite one-percenter, a member of the meritocracy that drives the fundamental progress of Humanity. I’m dead serious.