I remember the great holiday seasons of ages past, full of platform exclusives, fanfare, and sweet torment of abundant choices. This stupid pandemic screwed everything up, especially the platform holders traditionally averse to first-party gaming development, like Microsoft. What do they have to show after more than a year of Xbox Series S/X? Halo Infinite and Forza Horizon 5, of course, but just two high-profile games in thirteen months cannot possibly satiate the great hunger. If Microsoft hadn’t introduced Game Pass to the world, their gaming console would be quite a poor choice compared to PlayStation 5.

But wait, here’s another exclusive, albeit a low-profile one. The Gunk is a simple puzzle platformer developed by Image & Form Games, the people behind SteamWorld Dig series. The game is relatively short, clocking around 4-5 hours, and it’s devoid of serious challenges, both in a kinetic and cerebral sense. The Gunk has a feel-good story about (implied) romantic friendship under duress and the importance of exoplanetary environmentalism. Still, it doesn’t try to ham-fistedly telegraph any kind of progressive message. 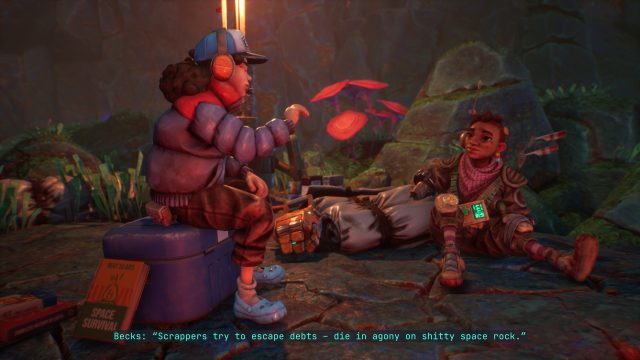 Rani and Becks are two broke space haulers, flying the decrepit ship and desperately trying to make a living in the harsh and unforgiving universe. They detect an energy spike on an uninhabited planet and decide to land, hoping for salvage that would put the food on the table. Instead of anything sellable, they stumble upon a mystery involving black goo that spreads around, killing the flora and clogging everything. Luckily, Rani has a robotic multitool prosthetic hand to suck that gunk and clear the environment. After a brief exploration, she unveils ancient ruins and installations that are somehow connected to the pesky goo. 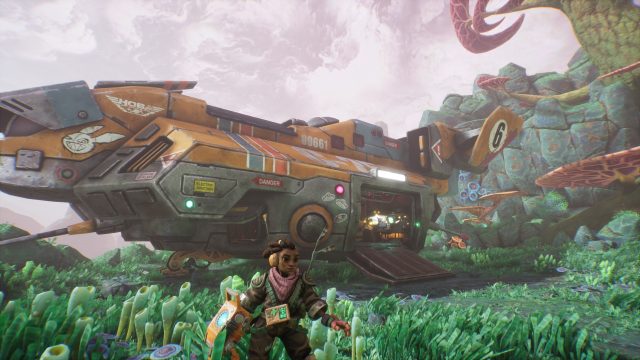 At this point, I’m glad Ridley Scott wasn’t involved in the scenario. Instead of inducing parasitic metamorphosis that gruesomely kills the host, The Gunk exists as a simple volumetric nuisance. It doesn’t replicate, and it’s suckable ad infinitum, which you’ll do most of the time here. Every gunk infestation is localized, and when you clean it all up, zone „blooms“ and everything comes to life. This usually causes plants to sprout, exposes platforms or other stuff that opens the way to further exploration. The game is linear, offering minimal backtracking and deviation from the path. Almost every puzzle is localized and fairly simple, and only near the end, The Gunk dares to impose slightly more demanding challenges. 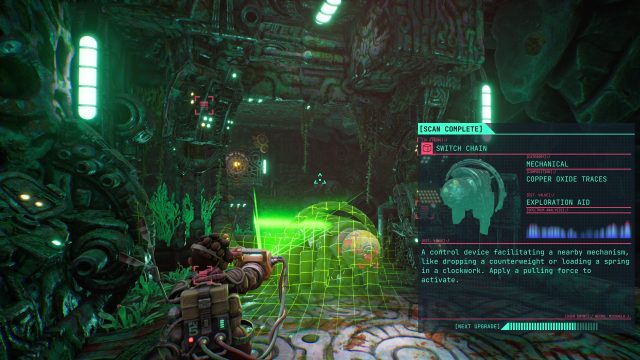 The heart of the game is a collection of environmental puzzles. Using the robotic arm/glove, you will use various seeds to modify the locales and open the way forward. One type of seed, when ripped from the stalk and launched into a green pool, sprouts platforming mushrooms you can use to reach previously unreachable places; the other seed is explosive, and it helps clear the rubble and gunk out of reach of your vacuum module. Pretty soon, you are introduced to the moving platforms, out-of-reach seeds that must be triggered by shooting at them, wind turbines, and other stuff that slowly and gently complicate the process of moving forward. Again, this game isn’t Portal or Talos Principle; it doesn’t strive for any kind of ingenuity or tries to mess with your mind. There are no “GOTCHA” moments here, just the gradual and casual march through the motions towards the end.

And a bit of combat 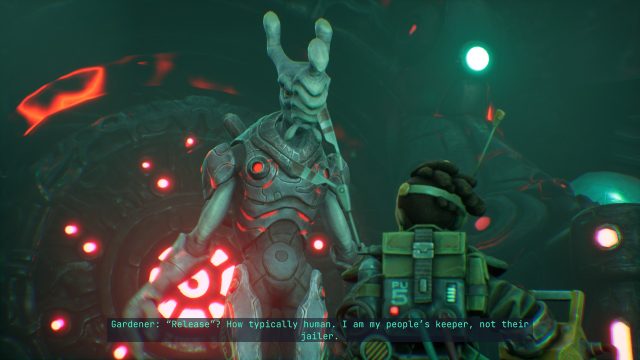 Sometimes, clearing gunk will expose the aggressive critters you’ll need to dispatch, usually by grabbing one and launching it to others. Later, you’ll encounter gunk spitter plants that you must uproot manually. There is a grand total of two boss fights in the game, and only the last one requires a bit of focus. Everything is way too easy, even for absolute newcomers to the wonderful world of puzzle platforming. For example, The Gunk is much easier and simpler than The Smurfs: Operation Vileaf, a PEGI3 game that I had played with my second-grade daughter a few weeks back. I’m puzzled about the target audience for this game.

The Gunk also has an upgrade system that you can safely ignore most of the time due to a general lack of difficulty. Collecting plant fibers, harvesting metal nodes, and grabbing other materials, enables you to upgrade the glove in various ways. Some upgrades, like energy pulse, are unskippable, but most others are entirely unnecessary. Creating the critter lures, for example, is redundant as any danger of that sort is quickly and effortlessly eliminated. Upgrades are unlocked gradually, using a portable scanner for cataloging plant life, relics, etc. Each scan moves the unlock bar a bit further, and when it reaches 100%, another possible upgrade pops up.

Every game needs a crisis 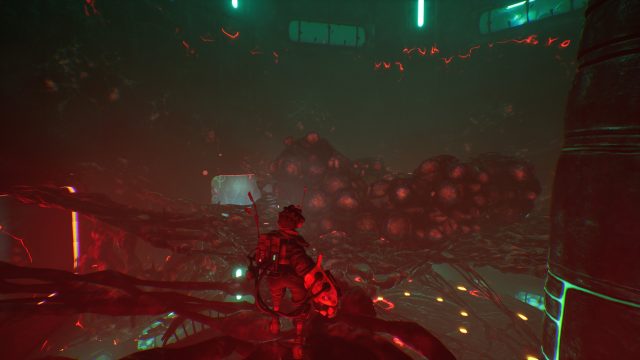 I guess the story is okay-ish, revolving around alien utopia hijacked by Gardener, a brilliant scientist suffering from megalomania and sociopathic tendencies. During the course of the game, you’ll learn about the downfall of their civilization, the origin of the gunk, and the fate of the survivors. You’ll also do a little bit of soul-searching regarding your partner and your place in the universe. Every game needs a crisis, but like everything else here, it’s pretty mild.

The Gunk is a simple game, perhaps overly simple. It has a decent story and characters, but the complete lack of challenge will leave many players dissatisfied. I, personally, didn’t expect something this casual from the makers of excellent and tricky SteamWorld Dig.