From Crusader Kings to Stellaris, Paradox Interactive masterfully translated the long ages between (factual) early middle ages and (fictional) space-faring future into epic strategy games. Each historical instance was molded around defining factors of the era. Notable people and dynasties, chief catalysts in Crusader Kings, evolved into the “ideas and nations” system of Europa Universalis. But a critical link in that multi-era spanning chain was neglected and left to rust for a long time. For the entirety of the last decade, the only connection between the post-Napoleonic period at the end of Europa Universalis and the beginning of the Second world war from Hearts of Iron was Victoria 2. Sandwiched between constantly updating franchises, Vicky was left to its own devices. Aged into semi-obsolescence, this complex geopolitical and economic simulation of the Victorian/Edwardian era desperately needed a technical and conceptual overhaul. It’s there now, and it’s pretty solid.

“History is a set of lies, agreed upon” 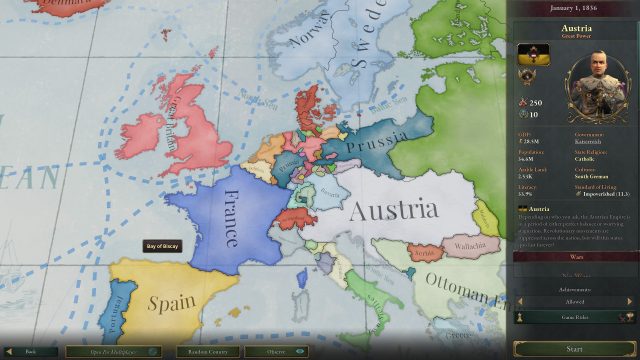 Sandbox game in Victoria 3 starts in 1836 and ends in 1936. Those hundred turbulent years of human history laid the foundation of the modern world, both in a good and a lousy way. Vicky’s century witnessed the American civil war, the abolition of slavery in the west, the emergence of universal suffrage, the first world war, the establishment of many modern nations, the industrial revolution, and more. That era was also a height of colonial exploitation, which the game simulates with a gloves-off approach.

We should never stop commending Paradox interactive for refusing to whitewash history. And for providing the player with the tools and options to truly simulate plausible “what if” scenarios. Morphing the USA into a theocracy or Russia into a progressive, laissez-faire parliamentarian republic in the XIX century? Making Serbia a regional superpower or transitioning the United Kingdom from a colonial titan to a presidential republic confined to their home islands? All that and more is possible in Victoria 3. But the engines of change aren’t omnipotent, so the game never strays from speculative to pure science fiction. Whatever you attempt and manage to accomplish must be possible within recorded history’s framework. 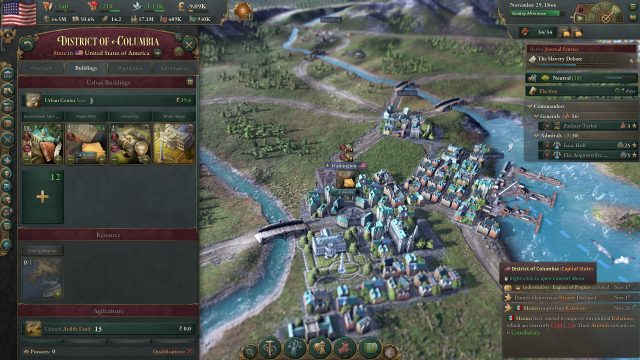 Gameplay changes from Victoria 2 are numerous, but listing them would be counter-productive as the temporal gap between games is immense. Most fans remember the first two Victorias in the broadest possible sense, and the specifics and minutiae are long forgotten. The most essential “fixes “are streamlined systems across the board and comprehensive tutorial campaigns. Since Crusader Kings III, Paradox took immense effort to flatten the learning curve, and that noble idea was further expanded here. You still need to invest a good dozen hours into playing, experimenting, failing, and learning from your mistakes, but the payoff will be there.

As before, economy and politics are two pillars of every state, existing in tight correlation with diplomacy and warfare. Providing well-paid jobs for your people enables all the good things like taxation, technological progress, and stability. The economy is resource-based, and the availability and price of those, whether via trade or indigenous production, is the pivotal factor in its health. The economic conundrum is, of course, much more complex than that, as the success of each business entity depends on several other factors, such as (availability of) qualified labor, ownership structure, distribution method, trade agreements, etc. 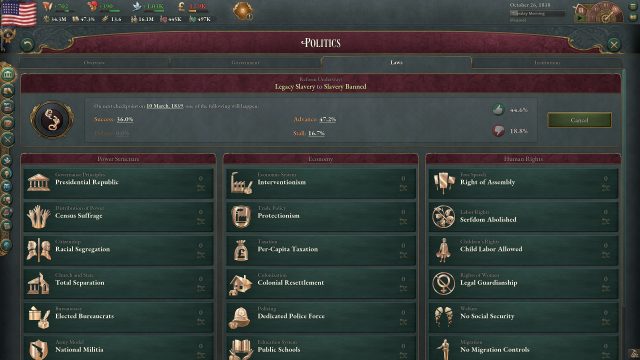 The evolution of society is primarily done via the legislature. Introducing the laws that shape society in the desired direction is tightly dependent on interest groups and political parties. In any system of government, they represent the different forces within the population, pulling the nation in many directions. Naturally, landowners, intelligentsia, industrialists, and labor unions want different things, so you need to balance out their participation in the government. Getting support for pushing radical laws is often very difficult. For example, trying to abolish slavery in USA or serfdom in Russia can easily lead to civil war.

It’s very easy to create tension within your borders, radicalize the population and end up dealing with armed rebellion. Deradicalizing the populous is never easy, and taking the easy way out, i.e., canceling the proposed reform, is often not enough once the pitchforks are out. Wars, both internal and external, are generally very costly, especially if you end up on the losing side.

Warfare is basic, but that’s by design rather than omission. Implementing a system more complex than declaring mobilization and assigning generals to offense or defense on different fronts would bloat the experience. Anyone who wants to focus on warfare should play Hearts of Iron, the next game in the Paradox’ temporal line. 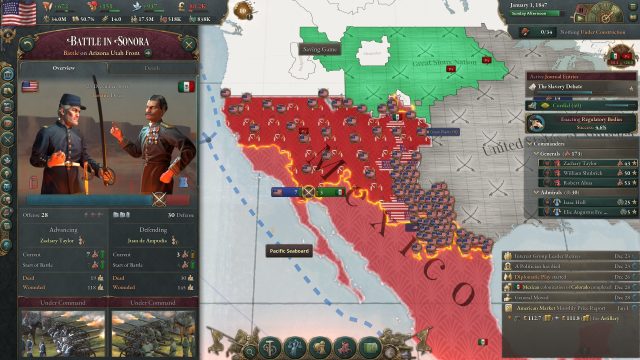 Victoria 3 is a very complex game, but some people will demand more complexity. Some of the complaints on message boards, though, are pretty sound. Simulating the strategic importance of major rivers and waterways, for example, is nonexistent. Knowing the significance of major European rivers like the Rhein or Danube for commerce and warfare throughout history, developers needed to implement them in some form. Diplomatic plays, tense, often multi-nation stand-offs work as a prelude to war in Victoria 3, but their endgame should have more variety. Nations seldom back out of their claims, even if it means disastrous shooting conflict. Diplomacy is, generally, relatively crude.

There’s little doubt that Paradox will massively evolve Victoria 3 over the next decade. Their business model with plenty of free and paid content proved to be very successful, so most likely, they gonna stick with that. Some DLCs will hopefully solve the somewhat west-centric flavor that permeates the otherwise solid launch version. We waited a painfully long time for Victoria 3, but it was worth it in the end.