Eighty percent of the Warhammer 40K product reviews begin with some cringy variation of „In the grim darkness of the far future, there is only war. “ Well, in the grim darkness of our pre-apocalyptic present, besides war, there is an over-proliferation of WH40K licensing. Bazzilion games and only a few are worthy of your time. At least Warhammer 40,000: Chaos Gate – Daemonhunters has the ambition on its side. It tries to fuse WH40K lore with the XCOM gameplay systems. Its production values are much higher than the average Warhammer rabble that comes out every day. So what exactly is wrong with it? 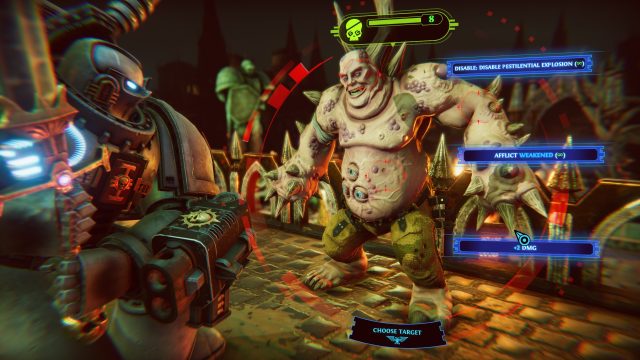 It most certainly isn’t the setup. Although it’s the good old Imperium of Man vs. Chaos, the nuances are exotic. The game puts you, the newly appointed field commander of Grey Knights, the elite of the Astartes elite, against the forces of Nurgle, the Chaos deity of death and disease. After so many games starring Blood Angels or Ultramarines vs. Orcs, Tyrranids, or Necrons, this is a welcome change. The sicko god stealthily but very efficiently corrupts the remote corner of the galaxy. His new and improved plague transmission method could potentially endanger the whole Imperium.

Additional drama is provided by a feisty female Inquisitor who commandeered your ship, The Baleful Edict, damaged and limping to the home base after the pyrrhic victory in the latest campaign. Technically, she outranks everyone, including the chapter commander on Titan, who is not happy about using the wrecked vessel for a dangerous wild goose chase. Young inquisitor Vakir will also clash with the tech-priest Lunete, who serves as a chief engineer, your old XO Ectar, and you, the replacement commander. She lacks the cold authority of Eisenhorn, relying instead on fervent feminine enthusiasm. 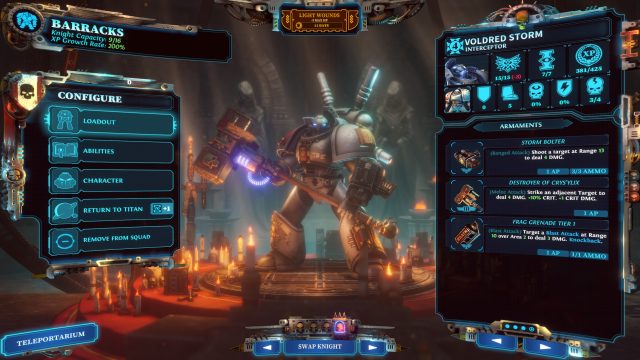 Like the latest XCOM games, Warhammer 40,000: Chaos Gate – Daemonhunters consists of two main elements, tactical battles, and base operations. Battles are almost a carbon copy of XCOM – turn-based, utilizing the fixed action points system, half/full cover, and customizable soldiers sorted by classes. The tac system lacks many subtle elements such as morale, but since Astartes are fearless, and cultists are crazy, there’s not much room for panic in the field. Also, there are no hit percentages – neither your guys nor opponents ever miss the shot, stab, bolt, or bite.

If you are familiar with Warhammer 40K lore, you know that Grey Knights are the elusive, secret elite of the Adeptus Astartes. Base space Marine is a badass, but a Grey Knight should be a mega badass, right? Surprisingly, the developers had managed the impossible feat of making those superhuman soldiers feel underpowered.

You will constantly feel crippled by a need for the artificial balance of power. Most foes, even the stupid, screaming cultists, have a longer range than your troops, and even their overwatch arc is longer than yours. The concentrated fire of the basic goons can easily obliterate your guys, even if, lore-wise, they should mow them by the hundreds. In the field, you will often feel like an imperial Guardsman rather than a superhuman Marine. Leveling up and getting better weapons and wargear helps, but not much. 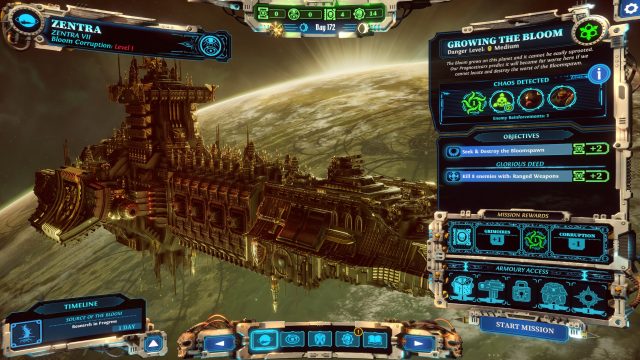 Between battles, you will deal with the ship and the people, delegating repairs, setting up research, promoting/equipping Marines, and occasionally having a conversation. Things sadly missing here are the sense of strategic urgency and the mission variety. You can take your time, waiting for repairs and research to finish or for your Marines to recuperate in the sickbay. That last thing feels a bit weird, to be honest. Why would an elite Space Marine with mutated metabolism and an accelerated regeneration rate require 38 days to recover from medium wounds?

The lack of mission variety is the most painful problem. For the first ten or so hours, until you reach a particular research milestone, you will essentially replay one mission repeatedly. It’s mind-numbing, to be honest, to search for some plague eggs in order to destroy them for a few hours straight. The campaign is a major drag, with long missions full of predictable, dull patterns. There is seldom a pace changer in Daemonhunters, such as a new class of weapons or the emergence of a powerful new enemy class like in XCOM. 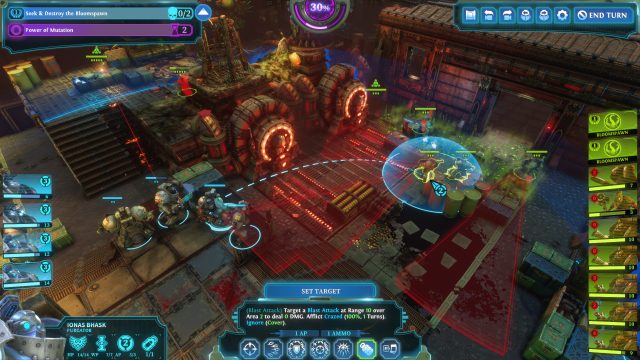 The weirdest thing about the game is the cutscenes. The whole thing is animated like a Hanna-Barbera cartoon, with overly-emphasized gestures that will also remind you of Warcraft 3 in-engine cinematics. Movies and dialogue often lack the sinister vibe and grim, stiff upper lip determination you expect from a WH40K lore. Strategy debates between the inquisitor and the rest often sound like workplace squabbles, with the petty pulling of rank and flaring tempers. Dialogues usually have a single voiceover sentence which often starts in the middle of someone’s lines. It’s screwing with your brain as you fight to ignore the incomplete voice to focus on reading. It’s super annoying.

Warhammer 40,000: Chaos Gate – Daemonhunters looks alright, but it’s slow to load and demands more from your PC than it should. We all know the probable culprit behind those two issues – the venerable Denuvo anti-tampering system. I honestly don’t know how the publishers could be this tone-deaf at this point. Using this dreaded DRM is never a good idea.

This is a very strange Warhammer 40K, I must admit. I never had the opportunity to study the licensing agreement Games Workshop makes you sign, but I’m sure there oughta be something related to the preservation of style and tone in licensed products. For a game that doesn’t do combat misses, it sure missed a lot of targets.