I don’t know the details of Warhammer 40K licensing agreements, but Games Workshop presumably offers a very sweet deal to every prospective developer keen to dip its toes into their glorious IP. There are a great many WH40K games out there, and sheer quantity inevitably breeds quality; Among those that came out in the last two decades, there are five or six outstanding ones – Dawn of War series by Relic Entertainment, Battlefleet Gothic: Armada, WH40K: Space Marine… We also have many mediocre and downright bad titles made by people who disregard the rule that gameplay and licensed lore are not worth much without the personality. Space Hulk: Deathwing and Warhammer 40,000: Gladius – Relics of War are the most recent examples of that kind of failing. 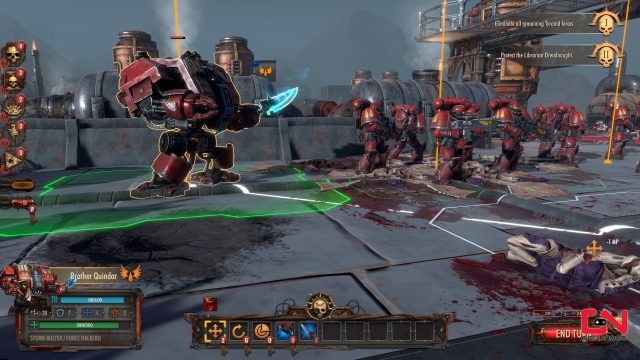 Being quite good but not awesome, Warhammer 40K: Battlesector sits in the upper middle echelon. The game succeeds in the personality department, oozing the atmosphere and having great characters that will especially appeal to WH40K fans familiar with the lore and history of Blood Angels chapter of the Adeptus Astartes (Space Marines in WH40K terminology). Their Sire, Primarch Sanguinius, had perished in the peak of Horus heresy, slain by the betrayer himself during the assault on the traitor’s flagship. His death caused the psychic imprint in the gene-seed of his Marines, who bear the „Flaw of Sanguinius“ ever since, manifesting in an intense thirst for blood that quickly turns into pathological Black Rage. Faced with the Tyranid devastation of their homeworld of Baal, some of the surviving Astartes went the way off the edge and stayed there. 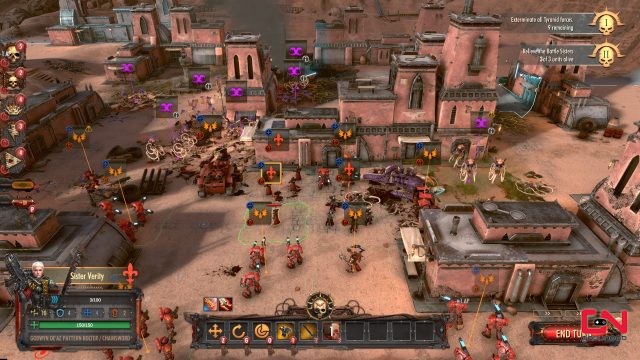 Baal and its entire system were saved by the bell. Tyranid leviathan was defeated by the sudden arrival of the Indomitus Crusade, a vast imperial fleet that dispersed the main alien swarm. Sergeant Carleon, one of the last surviving Blood Angels, was given command of the Primaris marines, new and improved breed of Astartes that will help rebuild his broken chapter. They need to root out the remaining Tyranids as the single overlooked nest could spawn fresh infestation if left to breed and multiply. Through the campaign of 20 missions, you will help him cleanse the Baal Secundus with fire, blade, and rage.

Warhammer 40K: Battlesector is a turn-based tactical wargame with the linear campaign and unit meta-progression, but not in the sense of specific unit boosts related to the combat experience a la Panzer General. Completing the primary and secondary objectives awards you with HQ upgrade tokens that can be invested in the talent trees of individual heroes, with each tree covering the said hero and several unit categories. For example, Sgt. (later Lt.) Carleon can improve various Assault Marine stats and gear since they belong to the same „class“, roughly speaking. You will augment passive abilities for your units, unlock new attacks such as Death from above for those flying Assault Astartes and enable the alternative equipment (flamers instead of bolt pistols in the case of Assault Marines). From one mission to another, you will slowly upgrade your force and mold it according to your preferred playstyle. Each mission has a strict deployment limit, so you’ll never be able to go giga-wild and pick only the most powerful units and gear combos. Since units don’t accumulate XP or level up, losing one or more in the field is a mere inconvenience just until the end of that particular mission, after which you can replace it from the infinite force pool. This is the missed opportunity that prevents real attachment to your forces. 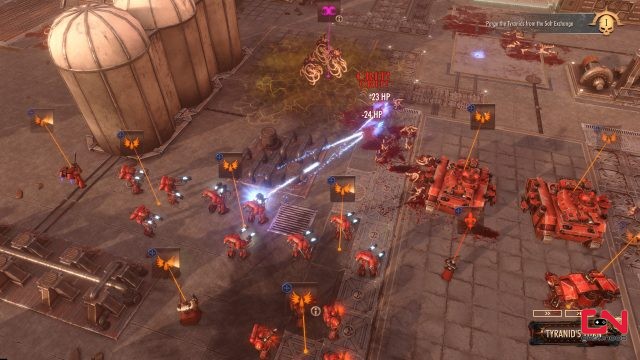 Unlike other turn-based WH40K Games, Battlesector implements the „momentum“ factor into the unit behavior, enabling the extra action point or activation of the improved ability when the momentum gauge of the individual unit fills to 100%. Due to their canonical „Red Thirst“, Blood Angels Marines generate momentum by killing their foes and using combat abilities; Sisters of Battle (Adepta Sororitas), an allied faction that will join you mid-campaign, have softer units, but they also generate momentum by receiving damage, enabling some ridiculous overpowering chains of abilities and attacks. Tyranids (you can play them in skirmish and multiplayer) generally produce momentum by moving near big command units, facilitating swarm tactics. Apart from moving, attacking, and using the specials3, some units have innate passive abilities that may not be known to the uninitiated in WH40K tabletop rules. For example, most units equipped with the pistol will provoke reaction fire to the frontally charging opponent, regardless of overwatch status. Then there is grazing damage, which happens when you use standard bolter fire on heavily armored units instead of plasma weapons. Knowledge of Warhammer 40K will help you make headway here. 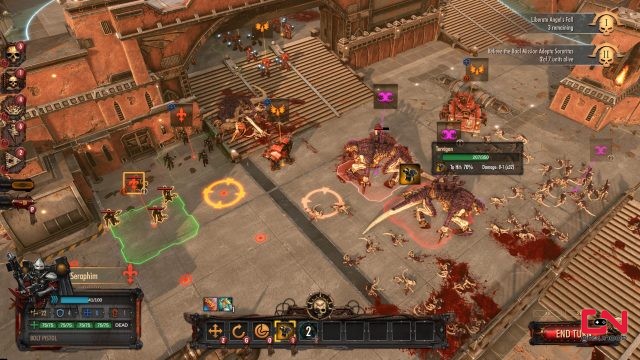 Too much of that knowledge could very well act as a detriment to the enjoyment, as the game difficulty is, by default, catered to „civilians“. When reviewing games, I always pick the default/middle/normal difficulty level in order to properly judge the degree of challenge that will befall the average player. On the default „Astartes“ level, the game was way too easy, and most of the missions I had spent playing on autopilot. So, if you are a veteran of previous WH40K games, both digital and tabletop, do yourself a favor and pick the hardest difficulty. The challenge it provides is tonally tied to the grimdark epicness of the campaign and its cast of superbly voiced characters. I had encountered many fanatics in WH40K games and lore, but sister Verity of Adepta Sororitas is my favorite. 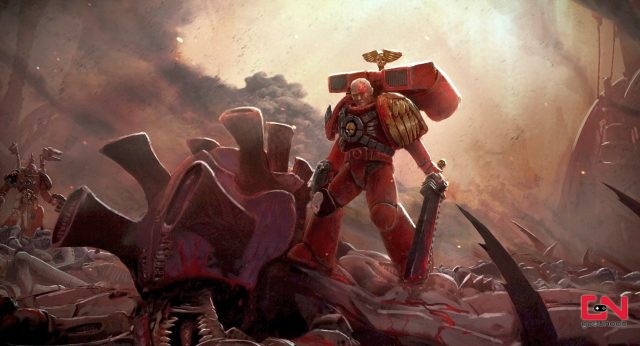 Warhammer 40K: Battlesector proves that you don’t need Chaos marines as an antagonist force to have a solid, engaging story. Coupled with great visuals but dragged down a notch via default lack of challenge and overly long missions, Battlesector provides more than twenty hours of playtime on the campaign alone. Being one of the last entertainment franchises utterly immune to the woke influences and obligatory progressivism, Warhammer 40K is still going strong when many other established franchises struggle to keep their audience. Never change, WH40K!

NEXT POSTHow To Unlock CX-9 In Modern Warfare and Warzone