Tengu of Ashina is an NPC in Sekiro: Shadows Die Twice. He’s a large fellow, and you can find him after you defeat the first boss. He’ll be waiting inside the Ashina Castle Gate Fortress, the big building near the Sculptor’s Idol. After you talk to him, he’ll ask you to help him hunt down some rats. This guide will tell you everything you need to know about Sekiro rat hunting quest, including rat locations.

If you choose to accept the quest, the Tengu will give you a description of the rats. It’s a key item, so you can always reference it later if need be. According to it, the rats are short in stature and they wear bamboo hats. They’re assassins from the Senpou Temple, and they’ve been seen skulking around Ashina Castle Gate. You might have noticed one (that isn’t part of the quest) in the opening sequence: the tiny, wrinkled creature under the bridge.

The first one you’ll find will be on the cliff next to the Ashina Castle Gate Fortress idol. He’s behind the big rock, next to the tree, so you might not spot him if you don’t go there specifically. He’s a nasty little piece of work. He’ll try to poison you, so be ready to dodge at a moment’s notice. 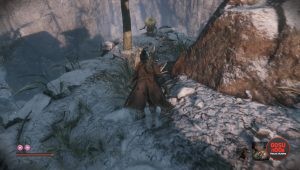 There are three more, and they’re all huddled together. Spawn at the Ashina Castle idol, then head up the stairs until you reach the closed gate. Use your grappling hook to get over the wall on the right, and you’ll end up in what looks like a forgotten garden. If you look in the direction of the idol, you’ll spot three tiny figures chatting under a tree.

Later on, after you’ve completed the rat quest, you’ll meet Tengu once again. He’ll be in the Sunken Valley, near the Serpent Shrine idol. His purpose there is to reward him with the Mushin esoteric text. However, he might not want to talk to you. If that happens, don’t worry – he will give you the text once you’ve obtained the final skill in any of the skill trees.

SPOILERS AHEAD: When you progress the story to the point where Ashina Castle gets attacked, Tengu will disappear. If you haven’t obtained the text until then, just go to Isshin Ashina and he’ll hand you the prize (provided you’ve unlocked any secret technique).

A description of the “rats” that have snuck into Ashina. Speak to the Tengu again once the rats are dealt with.

PREVIOUS POSTSekiro Save File Location – Where to find Save Game Data

NEXT POSTSekiro How to Loot & Pick Up Money