You are not sure how to quit Skyrim to desktop on PC? Don’t be embarrassed, you are not the only one! It’s a well-known meme with Todd Howard and his unbreakable desire to sell dozens of versions and editions of Elder Scrolls V: Skyrim. By this point, there is a dozen of editions and re-releases of Bethesda’s flagship game. And the latest edition, called Anniversary Edition, has come with a slew of new content, but also some changes which have confused players. Namely, players don’t how to exit Skyrim on PC anymore. Where did the Quit option disappear in Skyrim AE? Let’s find out! 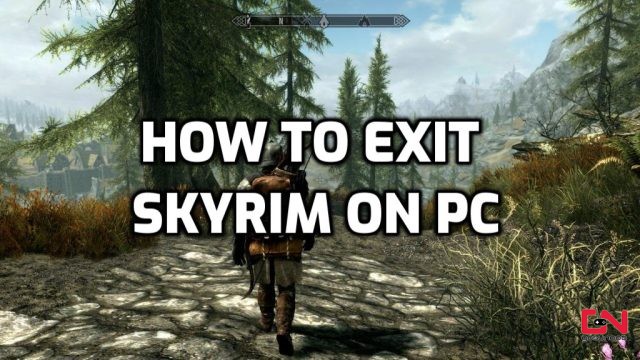 Where is the “Quit” button in Skyrim AE?

How to Quit Skyrim on PC

So, you’ve finally decided to play Skyrim for the millionth time, and you’ve installed The Elder Scrolls V: Skyrim Anniversary Edition. You play the game, and everything seems fine for now. After a couple of hours, you decide that it’s enough for the first session. Now you want to quit the game, you press the Escape button and slowly look for that quit/exit game button in the menu… Where is it?

It seems that since the Anniversary Edition update, many players, old and new, are unable to quit the game normally. Did Bethesda really delete the “Quit” option? Luckily, that’s not the case here. What happened is that they have added a “Mods” button to the menu. That additional item pushed the quit button just below the first visible window. So, to exit Skyrim, do as follows:

And that’s it. Everything is still where it was before, but the “Quit” option is now hidden and requires some scrolling. It’s honestly a rather bad UI design, as it doesn’t communicate that you need to scroll (it has no scroll bar). That’s why many players are confused about how to quit the game. Now you can have fun and quit whenever you want!

NEXT POSTThe Centennial Case: A Shijima Story Review – A Ceremony of Murders