There are seven entries in the Kashyyyk tactical guide in Star Wars Jedi Fallen Order. Scanning each of them will reveal information about the species, as well as their weaknesses. Some are numerous and easy to complete, others are rare or hard to kill, and you can’t scan them while they’re alive. Getting them all is a required step for unlocking the Data Collector trophy. If you’re having trouble completing the collection, this guide will show you all Star Wars Jedi Fallen Order Kashyyyk tactical guide scanning locations.

The first entry is the Flame Beetle, the big bug that looks like a firefly. There’s loads of them pretty much everywhere, so you shouldn’t have trouble scanning one.

The second entry is Wyyyschokk, the giant spider that looks more like a tick. They’re also pretty numerous, so we don’t expect anyone would run into any issues while trying to get a scan.

The third entry is the Jaw Plant, which is basically just a very large version of the Venus Flytrap. It’s the first tricky entry – as far as we know, you can’t really kill them. There might be a way to damage them after they’ve already swallowed you, but there’s no need to – there’s a dead one you can scan without the fuss. It’s in Gloomroot Hollow. After you exit the tunnel past the save point, you’ll go down a road with several jaw plants – the last one is dead, and that’s the one you can scan.

The fourth tactical guide entry for Kashyyyk is the Slyyyg, commonly known as the slug. A big slug with ram’s horns, but still a slug. You’ll find them all around, but the first encounter will happen on the way into the Shadowlands. There will be a bunch of them there.

The fifth entry is the Saava, an aggressive plant whose flowers are also its weapon. You’ve probably seen a bunch of them – their flowers are red and glowing, and as soon as they spot you, they start creeping towards you. The problem is, it looks like you can’t kill them. Thankfully, there’s one that’s already dead. After you meet Chieftain Tarfful and take a dive below the LAAT/I, you’ll use a lung plant and climb a tall cliff. At the top, you’ll see a couple of Storm Troopers fighting a couple of Slyyygs. There’s a pond beyond them, and the scannable Saava is to the right of it.

Mykal is the sixth enemy in the Kashyyyk tactical guide. It’s a blue flying reptilian that looks like a pterodactyl. You’ll first encounter it in the Overgrown Pass, on your way to the Shadowlands, after you force pull a bridge near the save point.

The Albino Wyyyschokk is the last entry. It’s a unique enemy and a mini-boss. You can’t really miss it, so there’s no worry there. It can be found in the Imperial Refinery area. 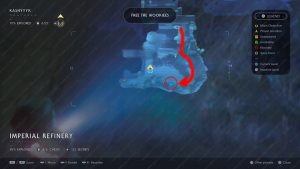