Ball puzzle in Tomb of Eilram on Zeffo is one of the challenges during the main story mission in Star Wars Jedi Fallen Order. In order to complete it, you’ll have to use golden balls with force powers to activate a bunch of switches, but you’ll start off with less balls than switches. With some clever manipulation, you’ll be able to complete the puzzle and leave the tomb. When you do, you’ll get the Obstacle is The Way achievement. This guide is going to show you Star Wars Jedi Fallen Order Tomb of Eilram sphere puzzle solution.

How to solve the Tomb of Eilram ball puzzle?

The room with the golden sphere puzzle has four funnel shaped switches on the floor. There are three balls in total you need to use. The switch where the first sphere starts off is optional – it leads to a side area and doesn’t need to be pressed in order to solve the puzzle. When you first arrive, force push the first sphere towards the guardian at the bottom and then onto the switch on the left, under the platform. It will open up the path around the platform and make wind blow. It’ll also open up the narrow tunnel nearby. 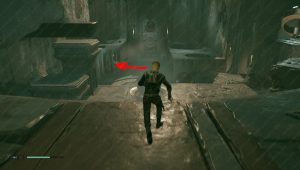 Go into the tunnel and follow the path onto the ledge. Use the net on the right to climb up, then squeeze between the pillars. You’ll find the second ball there. Push it down, then onto the path around the platform where the first ball is. The wind will launch the ball up and onto the ledge on the right side of the hall. Climb up there and you’ll notice another switch on the ledge – place the second ball onto it. This will raise the platform, opening up a path that will allow the third ball to go in circles.

How to get the third ball in Tomb of Eilram puzzle?

Go into the room with the pendulum, accessible through the hole on the right side of the hall. Operate the switch and then the wind will start blowing, thereby swinging the pendulum. Stand on the ledge and wait for the pendulum to line up with the cracked part of the wall. Use the force to push it towards the wall, and the third ball will fall out of it. Drop down and push the ball to break the wall and make it roll into the hall.

Push the third ball into the wind tunnel. It is the same one where you pushed in the second ball. It will start going in circles. Use the net on the walls around the first platform to climb above it. Wait for the ball to get near you, then slow it down and push it onto the third switch. The platform with the switch will rise up, and if you climb it, you’ll reach the final chamber.

How to exit the Tomb of Eilram?

You are now back at the elevator chamber with the ball in the middle. Push the cracked wall to enter the elevator. Now all you have to do is push the ball from the pedestal down the slide, and then you’ll activate the elevator that leads outside, completing the tomb and unlocking the Obstacle is The Way trophy. Video bellow should help with any questions you might have about this puzzle.

Ball Disappeared in Tomb of Eilram

Some players reported that one of the balls drops through the floor for them. If this happens to you try loading an earlier save. Go to the title screen and try Load journey there. Otherwise, you might be locked out of the game and have to start all over. One player reported that you have to destroy the guardian before you go to the second sphere. If you attempt solving the puzzle while the guardian is hanging around then you might get this bug. We hope Respawn fixes this soon in a patch.