There is a gaping discrepancy between the number of good Star Wars games versus good Star Wars movies and TV shows. Many ancient fans would agree that A New Hope, Empire Strikes Back, Clone Wars and Mandalorian is basically the only Star Wars content worth watching – everything else, including the last two horrendous movie trilogies, exists only as fodder and an inspiration for memes. Those movies most certainly don’t have high ground, general Kenobi… 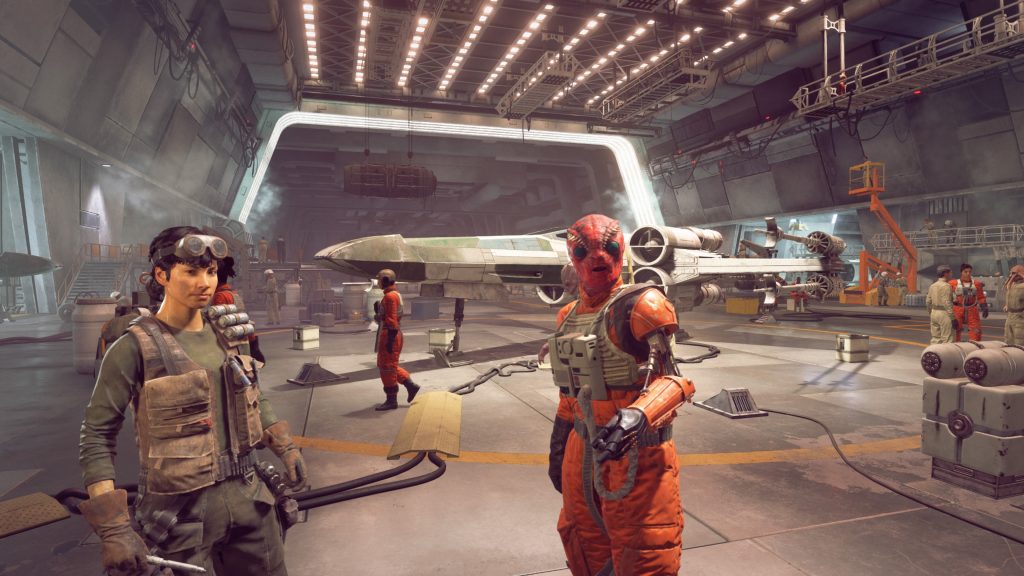 But Star Wars games are a totally different thing. Throughout history there were many, many excellent games that captivated the audience and would have made history even without a Star Wars license. Standing tallest among them is the X-Wing series of space flight simulators, which exploited the ultimate fantasy from that colorful cinematic universe – flying rebel fighter/bomber that managed to put a proton torpedo in a tiny heat exhaust and obliterate the Death Star.

X-Wing Alliance from 1999 was the last game in the series, but Electronic Arts somehow managed to stay on target and deliver a worthy sequel a whole two decades later. Star Wars: Squadrons, although not ideal, represents a solid comeback for a long-dormant space combat flight sim genre. It has both single player and multiplayer modes and it’s a multiplatform release, not a PC exclusive as its predecessors. 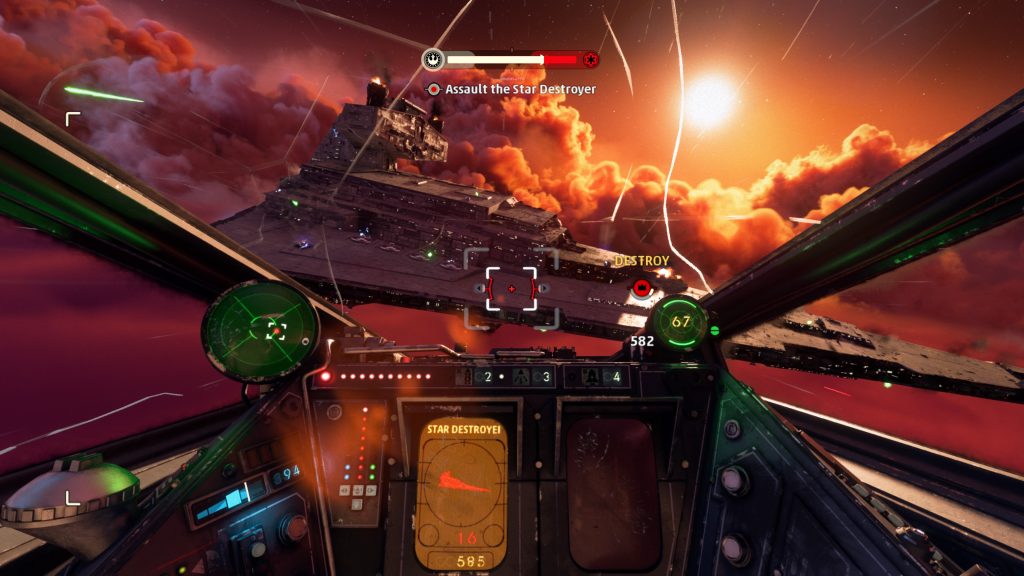 Star Wars: Squadrons has a relatively short single player campaign situated in the post second Death Star part of the timeline, with a short prologue placed immediately after the destruction of Aldeaaran. It tells the story of two elite squadrons, Rebel Alliance’s Vanguard and Galactic Empire’s (or rather, Empire Remnant) Titan, locked in the struggle of post-Palpatine era. The campaign shifts perspective between them, offering Rebels and Empire missions, presenting the opportunity to explore both sides of the conflict. The storytelling “meat” of the game are the dialogues between pilots, commanders and support staff which serve a purpose of bringing a bit of cinematic flair into the game. It’s nothing new, Wing Commander games pioneered it many cycles ago, but it’s nice to see it implemented again. 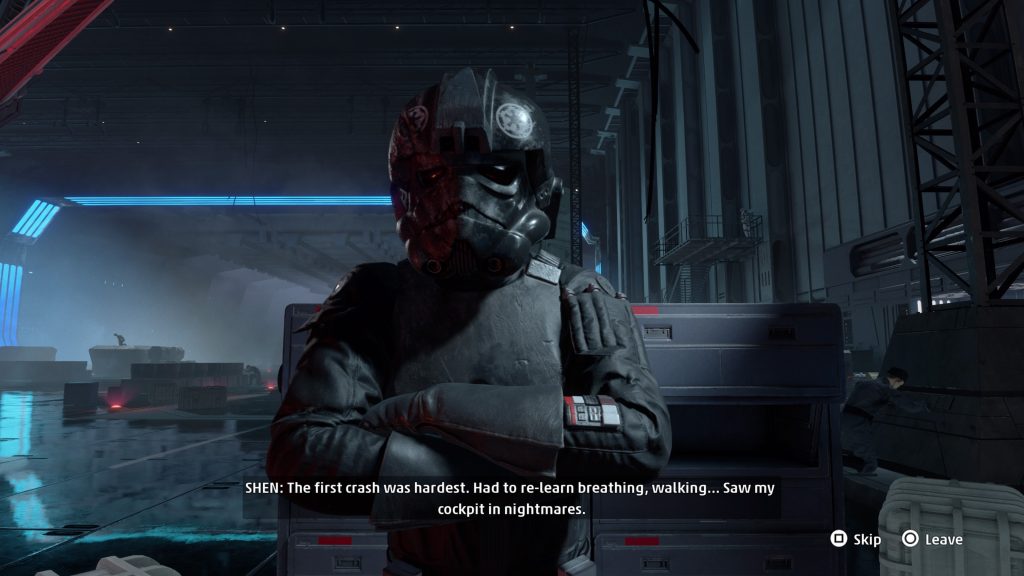 The main problem with the story are the boring rebels. With one notable exception in Trandoshan scoundrel turned pilot, everyone else is mind-numbingly forgettable – pretty soon you will be automatically skipping their scenes. On the side of Galactic Empire, we have a much more interesting cast of characters, with Shen, veteran TIE pilot suffering from multiple old injuries, particularly inspiring among them. Campaign missions are varied, but frankly, except for modern visuals, there is nothing new here for the players that grew up playing the old X-Wing games. There are some escort missions, but thankfully, they are not abundant. Campaign picks up the pace near the end, offering several remarkable encounters featuring capital ships and large-scale destruction. You could play the game in VR, but since that’s not our cup of tea (at all), we chose to ignore that option.

Flight model is pretty solid, bordering on awesome in some respects. You can fly a total of eight craft, four for each side. Rebels can choose between A, X, Y, and U-Wing, whereas Empire pilots can opt to fly various TIE craft. Each starfighter has a typical combat role and customizable loadout, and as before, energy management between engines, shields and weapons is a staple of good battlefield survivability. Multiplayer is fun but rather limited, at least for now. There are only two multiplayer modes, Dogfight and Fleet Battles. Dogfight is a classic Team Deathmatch (5 vs 5) in which the side which scores 30 kills wins and apart from interesting maps stuffed with obstacles forcing the player to combine shooting and hide&seek play, it brings nothing really new to the galaxy. 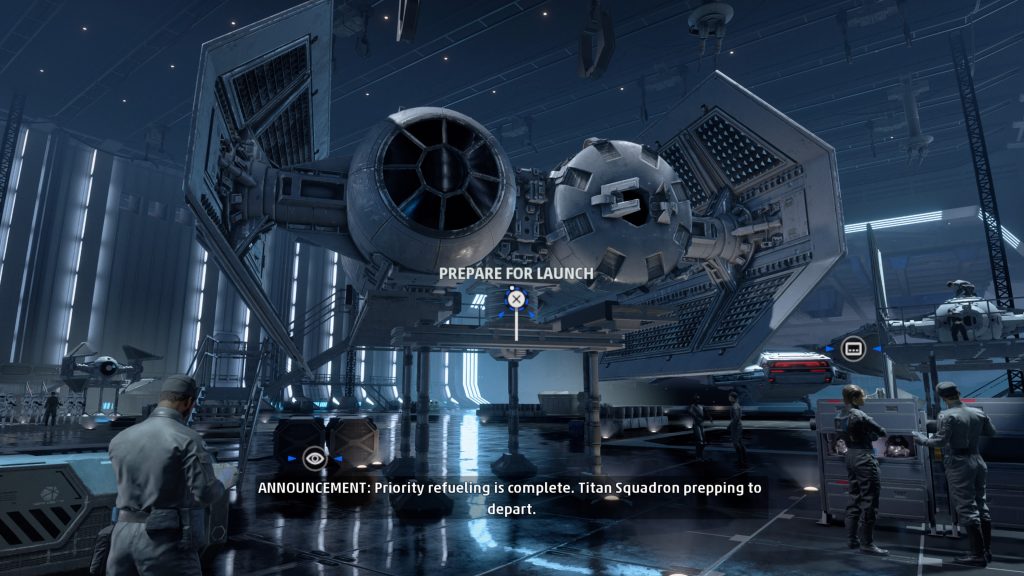 Fleet Battles are the main thing here – somewhat similar to Rush from Battlefield 1, those multistage clashes require each team to attempt to destroy the opponent’s flagship. Combat zone is divided into objective markers represented with lesser capital ships that need to be destroyed before the attempt on the flagship (Star Destroyer or Mon-Calamari battleship), but frontline is fluid and dependent on morale, gained by destroying the player-controlled enemy craft. It’s an interesting tug-o-war which requires a little bit of coordination, but it tends to drag on when both sides are evenly matched or equally ignorant of basic strategy. Playing either mode earns you XP, and with gaining levels, you obtain two different currencies: equipment unlock tokens and glory, used to buy cosmetic pieces for you and your starfighters.

Star Wars: Squadrons is a second game after a really long time that works best with the joystick. As with Microsoft Flight Simulator, they injected a healthy dose of life force into the calcified remains of flight stick manufactures, causing the market turmoil that emptied their stocks. The world is currently experiencing an acute flight sticks shortage and 2020 scores one more point for weirdness… 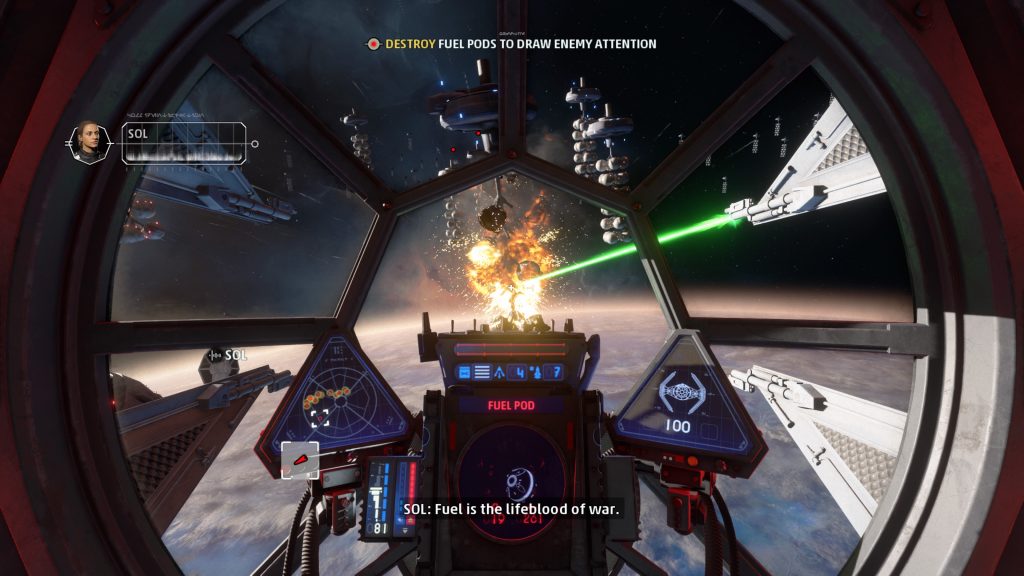 So, what can you use if you don’t have one? If you play the game on a console, you will naturally use a gamepad, which works as a solid alternative. PC gamers, confident about their ability to work with a mouse and a keyboard as a substitute for everything, will have a much harder time.

Star Wars: Squadrons is not an instant classic as its legendary prequels, but it’s a solid, capable game that fills a long-dormant niche. Its somewhat limited scope is reflected in the slightly reduced price of 39,99 USD (or EUR), which represents a solid value. For space combat sim fans who, frankly, are unable to get their fix anywhere else, this penny counting equation is a no brainer. They (we) got the game since day zero and don’t regret it (much).