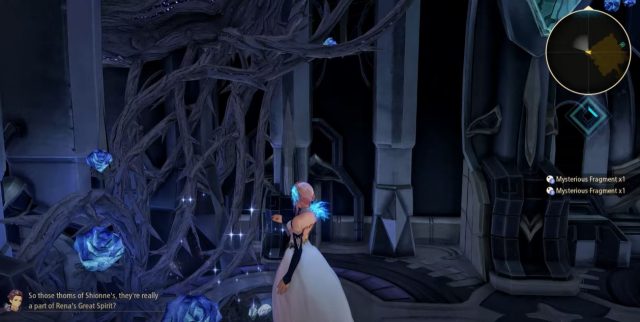 As we previously stated, there is only one place in the entire game where you will be able to find the Mysterious Fragments. This is in the last dungeon on Rena, before the final boss fight. The Mysterious Fragments themselves look like blueish crystal ore. When you interact with these, you will get a certain amount of them.

The Mystic Crest reduces casting time by 20%, so it’s an excellent accessory for any character that relies on Mystic Artes, such as Shionne. The most reliable way to get the Mystic Crest in ToA is to go to the Training Grounds at Viscint in Menancia. Here, you will need to complete Shionne’s Solo Battle challenge on Advanced. The recommended level to do this is Level 40, but she can do it before this as well (though it will be even harder). When you complete it, one of the rewards you will get from it is the Mystic Crest.

There is also a chance that a Mystic Crest will drop from a chest. For example, there is a room in the northwestern corner of the Tarfhal Helgarahi Lower Level 1F map. In this room, there is a solitary chest. When you open it, it should drop a Mystic Crest.

PREVIOUS POSTHow to Get Broly AUT – A Universal Time