Ancient tablets are a kind of collectible in Assassin’s Creed Odyssey. You’ll find them scattered around the world, and collecting them will unlock additional customization and upgrade options for your ship, and Lord of the Seas trophy / achievement. If you want better gear for the Adrestia, you’ll need to get as many as possible. Some of them are in easily accessible places, while others are well hidden. If you have trouble finding them, our AC Odyssey ancient tablet locations map guide will help you.

Where to find ancient tablets in AC Odyssey?

You’ll find tablets scattered around the world map, usually in temples, sanctuaries and ruins. Even though it looks like a single tablet, each one you collect is actually a stack – if you check the inventory after picking one up, you’ll find that gives you more than one. There are nine slots of ship equipment you can upgrade, each with three or more levels of efficiency. This means there’s going to be a whole lot of tablets you’ll need to find.

Kephallonia is the starting area. We’ve only found one tablet there, and it was in Odysseus’ Palace, on the smaller island (Ithaka). This one’s pretty easy to get – out in plain sight, no nasty guards to stop you from just grabbing it. It’s basically the game’s way of teaching you how these things work.

Megaris is the first mainland area you’ll visit after you leave your home. There are three tablets you can find there – one is at the Pillar of Dionysos, another at the Ruined Temple of Apollo, while the last one is at Zeus Ephesos. All three areas are guarded by soldiers, so you’ll have to work a bit instead of just taking them.

After Megaris, the main story missions will lead you into Phokis. There are four tablets in the lush forests of Phokis. You’ll find the first at the Tomb of Tityos. The second one will be at the Snake Temple, while the third can be obtained by visiting the monument to Prometheus and the Birth of Mankind. The fourth one is in the east, on the border with Boeotia, at Solitude Tower.

Attika is one of the main regions of the game – it’s where the grand city of Athens is located. It’s really surprising there aren’t more tablets here – we’ve only found two during our travels. The first isn’t even on the peninsula – it’s on the Isle of Salamis, at the Ruined Sanctuary of Ajax. The other one is at the Burned Temple of Hera.

Argolis turned out to be surprisingly rich in tablets – there were four of them, each in a different corner of the province. The first one was in the Asine Ruins in the south, the second at the Club of Herakles in the east. The third one was at the Palace of Hippomedon, in the far west, while the last one was in Mycenae, at Agamemnon’s Palace, all the way in the north.

Four more tablets are to be found in the province of Korinthia, where there’s still no canal to speak of. The first one is a bit south of the city, at the Kephisos Sanctuary Ruins. The second one is at the Ruined Temple of Apollo, west of the city. The third one is at the Ruined Temple of Zeus, while the last one can be found at the Altar of the Cyclops.

Naxos is a tiny island in the middle of the ocean. It’s fitting that there’s only one tablet there. Even with just one, it has a much higher tablet-per-capita than bigger regions like Attika or Argolis. You’ll find it at the Deathbed of Ariadne. Yes, it’s that Ariadne. Apparently, Theseus ditched her when she fell asleep on Naxos, after which she ended up married to Dionysus. Go figure.

Lakonia – where to find ancient tablets?

Now here’s an odd one. Lakonia is arguably one of the biggest areas in the game. Just scroll down to the southwest and look at it. It’s pretty big. Yeah, most of it is uninhabited, but it’s still large. But there’s only one ancient tablet in the entire region. Odd, no? You’ll find it at the Burned Temple of Apollo.

Messara is one of the two areas on the southern edge of the map. It’s an arid place – all dust and stone, no trees or grass or any kind of vegetation. You won’t have to stay there long, though – there are only two tablet to find there. The first one is at the Phaistos Theater, while the other awaits at the Lost Minoan Shrine.

Pephka is the other of the two cursed places in the south, a barren and dry location. It’s even smaller than Messara, with even less ancient tablets – only one. You’ll find it at Zakros, all the was to the southeast of the region. Grab it and let’s move on.

The island of Kythera is located in the south of the map, west of the two areas mentioned directly above. You’ll find two ancient tablets there. The first one is at the Mycenaean Ruins in Skandela Bay, while the other is at the Diakofti ruins, on the miniature island north of Kythera.

You’ll find two tablets in Boeotia, the area north of Attika. The first one is in the southwestern corner, at the Temple of Athena Itonia, overlooking the sea. The other is on the western shore of the lake, at the Tower of Askre.

We’ve found three tablets on the island of Euboea, north of the Attika peninsula. The first one on the north side, at the Seaside Altar. The second was a bit to the south from it, at the Apollo Temple. The final one can be found at the Altar of Poseidon, all the way to the southeast.

The region of Malis is on the northwestern corner of the map, north of Phokis. So far, we’ve found only one tablet there. It was in the north of the zone, at a place called Temple of The Golden-Bowed Goddess. 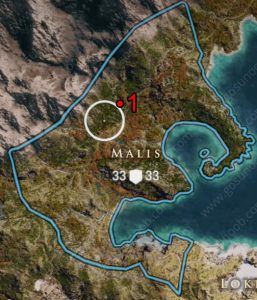 Makedonia is the large region in the far north, the one with the three peninsulas that look like fingers. There’s only one tablet in the entire area, and it’s at a place called Xerxes’ Sacrifice of The Nine, north from the end of the easternmost peninsula.

The island of Lesbos is all the way in the northeastern corner of the map. There are four tablets there, and all of them are in the southeast. The first one is at the Ancient Sanctuary of Zeus at the end of the bay. The second one can be found in the Temple Ruins west of Lover’s Bay. The third is at the Lost Shrine of Poseidon, on the western side of said bay, while the fourth one is in the forests to the west, at the Ruined Sanctuary.

Messenia is the region in the southwestern corner of the map. It’s quite a big area, but we’ve found only one ancient tablet there. It’s in the Palace of Aphareus, north of the Bay of Hades.

Arkadia is arguably one of the largest areas in the game, which is what makes the fact there’s only one tablet there pretty strange. We might’ve missed something, but for now, we only know about one – it’s in the Origins of the Karyatids, in the east of the area.

Elis is the dry, mountainous area a bit south from Kephallonia. You’ll find two tablets there. One is at the Dyspontion Ruins, south of the Forgotten Swapms, while the other is at the Spring of Piera, by the small lake west of the city.

Achaia is the last area we have here – it’s the first one to the south from the starting island. There’s only one tablet there, but by now, you probably don’t need much more than that. You’ll find it at the Ruins of Helike, a fortress on the shore.