She Who Controls the Seas is one of the quests you can get from Xenia in Assassin’s Creed Odyssey. It’s a treasure map quest, and it becomes available after you complete Sacred Vows. She’ll ask you to get her Triton’s conch shell, and give you two treasure maps with possible locations. Only one of those is real – the other is misleading. If you can’t be bothered to find Triton’s Shell of the Tides yourself, our AC Odyssey She Who Controls The Seas quest guide will help you.

Unlike Sacred Vows and the quest before it, this time you’ll only have two maps. Still, one of them is fake, and if you don’t want to waste time checking them both out, you should follow this one: 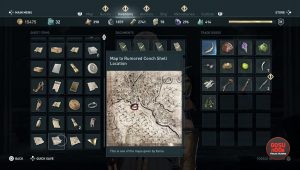 Triton’s Shell of The Tides location

This one may be the hardest yet – Xenia won’t give you any clues apart from the maps, which are vague as always. In order to find Triton’s conch shell, you’ll have to travel to Makedonia, the region in the north with the three finger-like peninsulas. The shell is being held by a group of bandits hiding out in an underwater cave between the western and middle finger.

You don’t have to kill them, but sneaking past them doesn’t seem possible – the area is cramped and there’s quite a few bandits. After you’ve dealt with the enemies, look for Triton’s Shell of the Tides in a chest under one of the eaves. 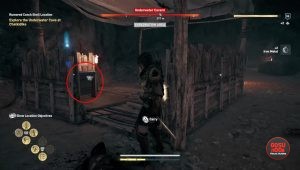 Once you have it, go back to Xenia – she’ll be at her usual spot, overlooking the island. Talk to her and you’ll get your drachmae, as well as the option to start the next quest, called Throw the Dice.