Sacred Vows is one of the side quests you can get from Xenia in Assassin’s Creed Odyssey. It is unlocked after you complete Birds of A Feather, another treasure map quest from the pirate queen. This time, you’ll have to visit several sacred sites in order to find a Makedonian bracelet. There are fake maps again, which could send you on a wild goose chase. In this guide, we’re going to help you complete AC Odyssey Sacred Vows quest by showing you where to find Makedonian bracelet.

Like in Birds of A Feather, Xenia will give you two fake maps this time as well. Either she likes messing with you, or somebody’s feeding her bad intel. Either way, only one of the thre maps you’ll get actually leads to the treasure. If you don’t want to waste time checking out all three locations, but don’t want detailed instructions, here’s the real map: 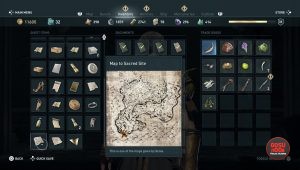 The true sacred site is in the region of Attika. It’s all the way in the south of the peninsula, at the Temple of Poseidon. Once you get there, go behind the temple, to the small altar on the edge of the cliff. You’ll discover an offering box is missing. A trail of clues will appear – follow it and investigate each one. You’ll end up on the other side of the big rock, at another ocean overlook.

You’ll see two couples there – talk to the ones standing near the edge. You’ll discover one of them stole it as a present for the other. The latter got scared of being struck down by the gods, so he decided to throw it into the ocean. Jump down into the water, and you’ll see the Makedonian bracelet as soon as you dive in.

Return to Xenia and she’ll pay you for your efforts. This will unlock the She Who Controls The Seas quest, the next treasure map adventure.

PREVIOUS POSTIkaros Prompt Notifications – How to Turn Off in AC Odyssey