Gift From the Gods is a new quest in AC Origins. It’s part of the collaboration with Final Fantasy XV, and when you complete it, you’ll get a sword, a shield and the Chocobo mount. There’s a sundial puzzle you might have trouble with, which is why we’ve decided to write this AC Origins Gift From the Gods guide.

Where to find the FFXV Quest in AC Origins?

First off, make sure that your game is updated to version 1.10. If you haven’t updated the game since December 12th, you’ll need to do so now. As you log into the game, it will check for the additional content. In the main menu screen, in the lower left corner, you can see the version of the game you are currently running. 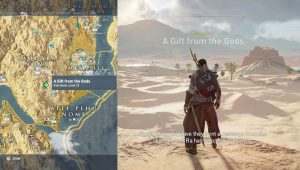 With the updated version, once you log into the game, you’ll get a message that a new quest is available after a few seconds. This quest is called “A Gift from the Gods”, and it is located in Saqqara Nome region, in the eastern part of the map. There is an obvious green question mark on the map. This is the Assassin’s Creed Origins quest that features elements of Final Fantasy XV.

How to Solve Sundial Puzzle

As you get to the quest mark on the map, you’ll see something that will guide you towards your first objective – “Reach the crash site”. At the crash site, you’ll spot a fallen star, and a newly-revealed entrance to the nearby tomb. Head inside and explore the tomb. This is where you’ll get your sundial puzzle clue, as well as the Roman number XV.

To start the next objective, you’ll need to get to the nearby site, outside of the tomb with the clue. It is to the left of where you had entered the tomb. You’ll spot it by the very noticeable large sundial. Since you’ll need arrows, there is a broken carriage nearby with a lot of them next to it.

To solve the Sundial puzzle, you’ll need to be there at a specific time of day. This is easily done if you speed up time with meditation, until you spot that some of the large pillars have one of their sides lowered down, thus revealing their middle section. These middle sections reveal crystals, along with more clues on them. These clues present numbers: I (1), III (3) and IIIII (5). 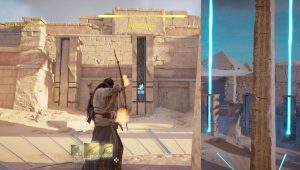 To solve the sundial puzzle, we need to shoot the crystals a couple of times, so that their signs add up to the number 15. Once done, you’ll witness a bright blue light coming out of these crystals, and the large doors in the starting tomb will open. You’ll get to enjoy a nice and short cut-scene, and, in the end, earn your prize of three awesome items.

The AC: Origins FFXV quest “A Gift from the Gods” gives three awesome items at the end of the quest. These are the Chocobo Camel mount – Kweh, the Ziedrich shield, and Noctis’s final Engine Blade upgrade – the Ultima Blade. 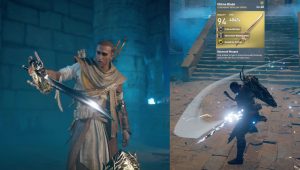 Ultima Blade has 404 damage per second, with a quality of 94, critical hit rate, adrenaline regeneration and health for critical hits. Its description says: “Only a blade forged in Insomnia would tirelessly absorb the life-force of fallen foes”. As you start swinging with this weapon, you’ll notice a white light coming out of it. 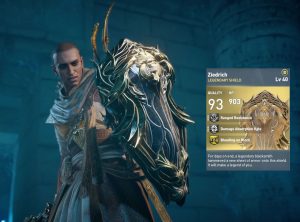 Ziedrich is a legendary shield with 903 HP, quality of 93, range resistance, damage absorption rate, and bleeding on block. Its description says: “For days on end, a legendary blacksmith hammered a new sheet of armor onto this shield. It will make a legend of you”. 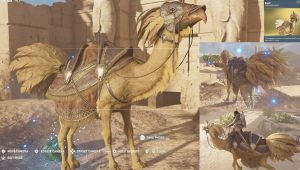 Kweh, or your Chocobo camel description says: “This enigmatic creature’s tremendous speed was once used for racing”. This mount has the same speed as the other mounts. Although some of us had hoped to see a true Chocobo in the game, we’ll have to make due with the camel version.