Lights Among the Dunes is a new side quest in Assassin’s Creed Origin. It’s an introduction quest for the upcoming Curse of Pharaohs expansion. It gives players some idea of what about to expect, with a bit of lore about the next content drop. In this guide, we’ll walk you through all the objectives in Lights Among the Dunes Assassin’s Creed Origins side quest.

How to Start the Light Among the Dunes?

To start the “Light Among the Dunes” quest, you’ll need to update the game to the latest 1.40 patch. This one went live on March 6th, on all platforms. 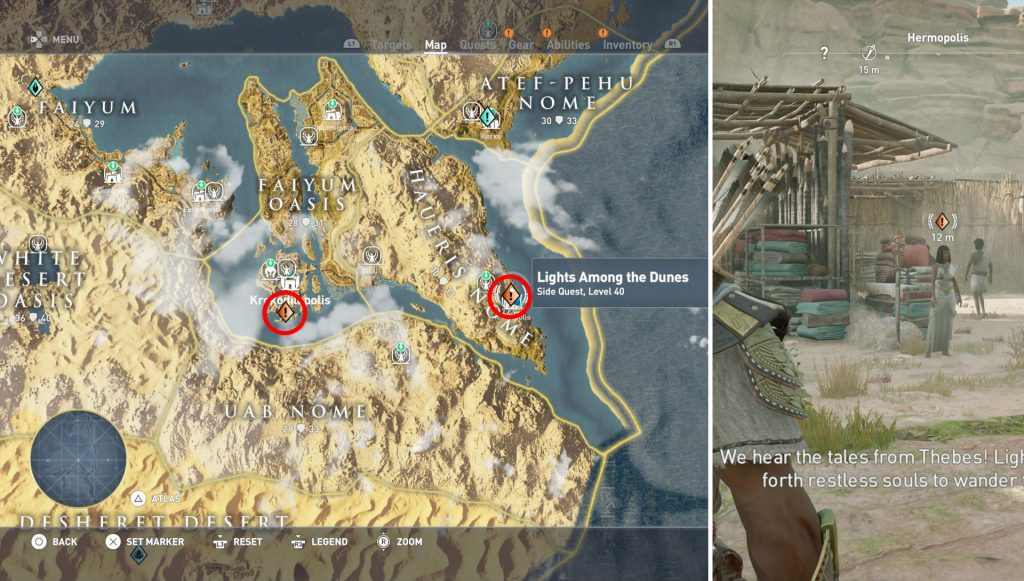 Once the update is complete and new Trials are up and running, you’ll see two new orange exclamation marks in the southern main zone. The two of them are in the southern areas of Faiyum Oasis (level 28-31 zone, Krokodilopolis town), and the zone next to it, Haueris Nome (30-33 zone, Hermopolis town). Get close to one of these locations, and you’ll hear a woman preaching about the tales from Thebes. As she completes her doomsday “sermon”, the quest will start.

The first quest objective is to investigate the sightings in Desheret Desert. This is the southernmost area of the main map. There is one fast travel spot in Uab Nome you can use to get closer, and from there, just head into the desert. If you’ve been in this area doing quests (the most famous one with turning the large mirrors), you’ll remember this spot.

The objective will end when you find the entrance to Seth-Anat Tomb. You’ll find it just a bit towards the southeast from the quest objective marker on the map. There are two lit-up braziers in front of a small entrance towards the wall. Go into the Tomb and speak with a man inside to trigger the next step.

Find and Retrieve the Mysterious Artifact

It’s almost impossible to not find this objective goal, as there is a giant light beam shooting from the mysterious object towards the heavens. Just head towards the beam, and you’ll reach your destination. Be ready to fight though, as once you pick up the Unidentified Artifact quest item, you’ll need to defend yourself from the waves of enemies.

Return the Artifact and Escape the Tomb

On your way back to the tomb, you’ll meet new types of enemies. They are on horseback, and some of them can catch up with you rather fast. You can avoid most of them on your horse, but some zig-zagging might be necessary.

With the artifact in your possession, go back to Parh’s location and place the quest item on the wall. This will start the next objective, and you’ll have to escape the tomb. The number of enemies is quite large, and there is no need to stay there any longer. This step ends as you reach the entrance of the Seth-Anat tomb, with a short cutscene following it. Upon completion of the quest, you’ll get 3000 EXP and the Spirit-Catcher Light Bow. At level 45, the Spirit Catcher does 745 damage per second, with 99 quality, rate of fire II, Critical Hit Rate II and Health on Hit.