Ubisoft’s big pre-E3 conference was held at the Orpheum Theater some hours ago, and we were there to investigate. The venue has aged visibly, but still maintains an air of 30’s Broadway glitz, somewhat out of place between the skyscrapers and dinky jewelry stores. While we waited for the conference to start, Ubisoft bribed us with ice-cream. 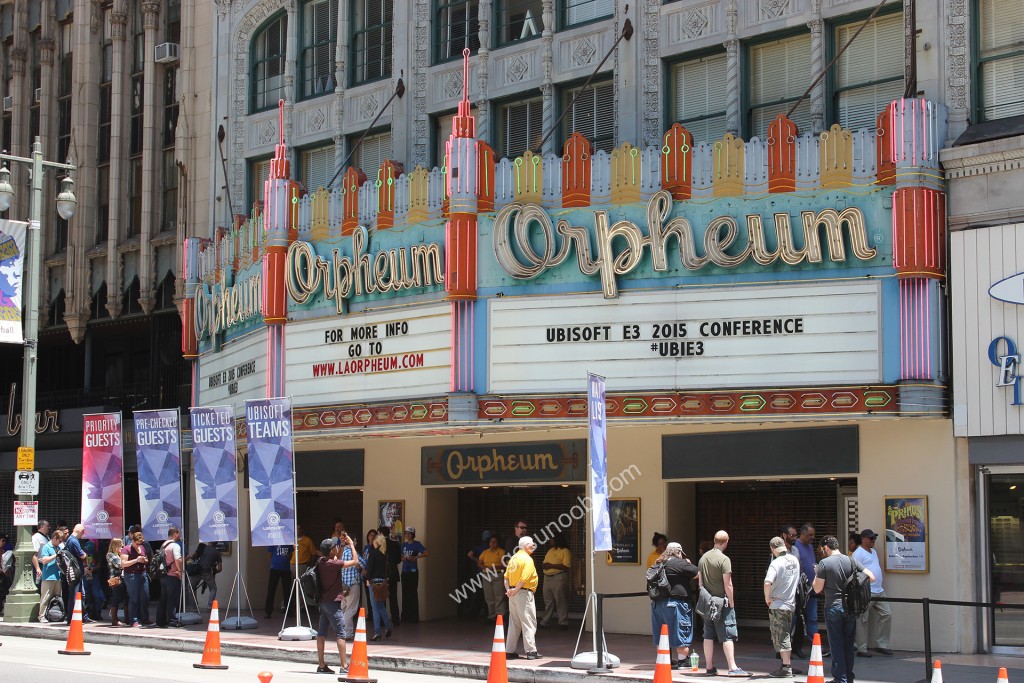 There was a cosplayer dressed as Jacob from Assassin’s Creed: Syndicate, who was glad to take pictures with attendees. At one point, I saw him boldly crouching on a balcony rail, no regard for his own safety whatsoever.

As usual, Aisha Tyler was the one to host the conference. Her presence gave it a dash of much needed warmth and friendliness. Matt Stone and Trey Parker were the first ones to take to the stage, to announce South Park: The Fractured But Whole. This was the highlight of the show for me personally, as I’ve immensely enjoyed the first one. The new game will do away with magic in favor of superheroes. Expect The Coon. There was no mention of a release date, sadly.

Next up was a performance by a chart-topping singer whom I sadly did not recognize. The ladies of the audience were quite happy to see him, though. After his performance, he announced Just Dance 16 and a subscription based service with more songs. It’s the same as Just Dance 15, with new tracks. Classic Ubisoft.

Rainbow Six: Siege won a round of applause. So did Angela Bassett, who plays Six, and was present. Sadly, the actor portraying Rainbow couldn’t attend for personal reasons. The demo looked nice enough, with coop taking center stage.

There was finally new footage of Tom Clancy’s The Division, the twice delayed fan-favourite. A single mission was on show – a short one, consisting of several steps. The interesting thing is that you’ll be able to react to things in different ways, which will affect the course of the mission. Near the end of the mission, one of the team members decided not to share and murdered all the others.

The release date is set for March, and hopefully a beta will precede it. We’re going to have some hands-on time with it during the show, so keep an eye out for our impressions.

For Honor is a new IP that involves three factions (Vikings, Samurai, European Knights) duking it out on a medieval battlefield. The foundation will be a 4vs4 multiplayer mode, and there will be several warrior classes. There was a live demo during the presentation, but it felt too staged, and the biggest takeaways were the emotes and finishers. So far, so Chivalry: Medieval Warfare.

The thirds Tom Clancy branded game was Ghost Recon: Wildlands – an interesting-looking open world game in which you fight drug cartels from the inside. There was little info aside from the trailer, so your guess is as good as mine.

The biggest surprise was the lack of Assassin’s Creed: Syndicate talk. Unlike Bethesda, who devoted the most time to their heaviest hitter, Ubisoft decided to skimp on information about theirs. A single trailer was shown, and it was mostly CGI. It felt like they’re not all that confident about Syndicate, and I got the feeling they might postpone it into 2016.