Sony’s press conference took place in the Los Angeles Memorial Sports Arena. After attending the Bethesda and Ubisoft conferences, which were held in theaters, the Sports Arena looked like the biggest place on Earth.
▼Article Continues Below▼
Thousands of people waiting, eight tents with refreshments, tables out in the open where you can sit and discuss business. The line seemed endless, but we were in in no time. 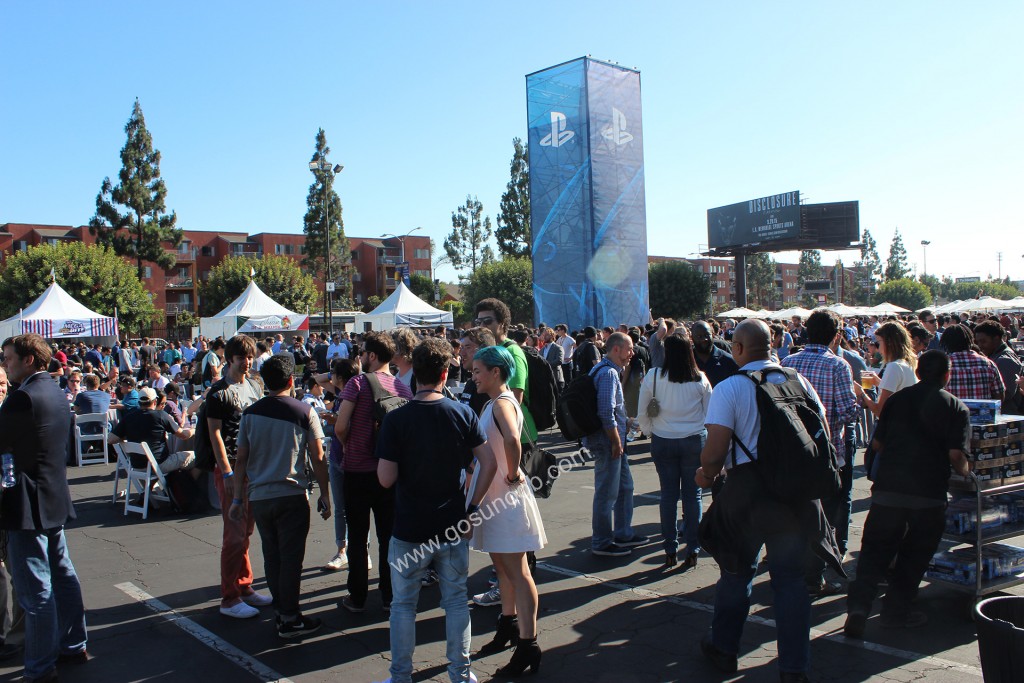 This was an order of magnitude bigger than the other conferences we’ve visited. We managed to get seats close to the stage, and waited for the part about the consoles, apps and synergy to end. Then it was time for the games. To everyone’s surprise, they started with the first ever gameplay video from The Last Guardian. We all thought nothing would ever come of it, but there it was. It was magnificent – this strange, otherworldly thing that looks like it will tell beautiful stories for the whole family.

No Man’s Sky was finally demoed, but there was no mention of a release date. The scope of it is massive. The person playing the demo looked like he wasn’t prepared for what he saw, like he really decided to go to a random planet. We saw some creatures defending their home planet from him – does this mean there are barriers that lock the players out until the game deems them ready, or are they simple obstacles?

When he discovered a point of interest on the planet he chose to explore, he went down to the surface – without any loading screens – and switched to battling the wildlife, breaking things for materials and exploring. It seemed like they wanted to end the demo as soon as possible for some reason, like they were affraid of showing us more than they intended to.

Final Fantasy VII Remake caused the most excitement among the audience. According to the developers, it won’t be a HD reskin – they’re going to actually re-make the game from the ground up. I was bemused to see FFVII instead of the upcoming FFXV on show. Maybe they’d show it afterwards? Sadly, no. Afterwards was reserved for World of Final Fantasy, a children’s game of sorts.

I was surprised to see Assassin’s Creed: Syndicate here, since Ubisoft had their own conference, but there it was. They’ve shown a bit of gameplay with Evie – I got the impression Jacob is meant for open world exploration and gang related activities, while Evie’s forte are stealthy missions.

There was a bit of footage from Star Wars: Battlefront, snippets of gameplay from Tatooine, which looked amazing. They showed the survival mode, in which players have to fend off waves of AI attackers. Disney Infinity: Star Wars Saga was tied into it, and we’ve learned the PS4 version is going to have an exclusive Boba Fett figurine.

Destiny is going to get another expansion during the holiday season, The Taken King. There’s going to be new classes, strikes, maps – the usual. It will even have some exclusive PS4 content. I was more interested in the new powers than the content itself, with the exception of the raid. I think it’s time Destiny got a heftier, meatier upgrade – enough with the crumbs.

Finally, Uncharted 4 appeared. They had a bit of technical trouble with the game, but once the demo started, all was forgotten. The adventure epic is coming back, bigger than ever. We’ve seen an exotic island town being destroyed by Drake trying to evade pursuers, and we liked it. Expect lots of shooting, car chases and snarky remarks. The release is planned for March 2016, but the exact date hasn’t been decided on, so take that with a grain of salt.

Call of Duty: Black Ops 3 was there as well, looking as bland as ever. It will feature a co-op campaign, but the focus will be on multiplayer, as usual. Playstation owners will be getting exclusive maps for the game, as well as access to online betas.

All in all, there was a bunch of good stuff to gawk at here. Sony’s conference had something for everyone, and it felt more relaxed than before, probably due to not having Microsoft breathe down their neck. The offering of eastern games was amazing, the AAA blockbusters looked spiffy – Sony fans have nothing to worry about in the coming year.