Capricorn Nostradamus Enigma is a side mission in Assassin’s Creed Unity which rewards you with fragments that unlock a special assassin outfit in the basement of your home. Capricorn Enigma starts just a bit north of Notre-Dame island in Hotel de Ville district of Ventre de Paris zone.It is a five star difficulty mission, but that don’t mean much sine you won’t be fighting anyone while you solve it. It does have a very hard final riddle so these difficulty ratings might refer to how difficult it is to find solutions to the puzzles. All solutions are in the vioncinity of where you start the enigma so keep an eye out. 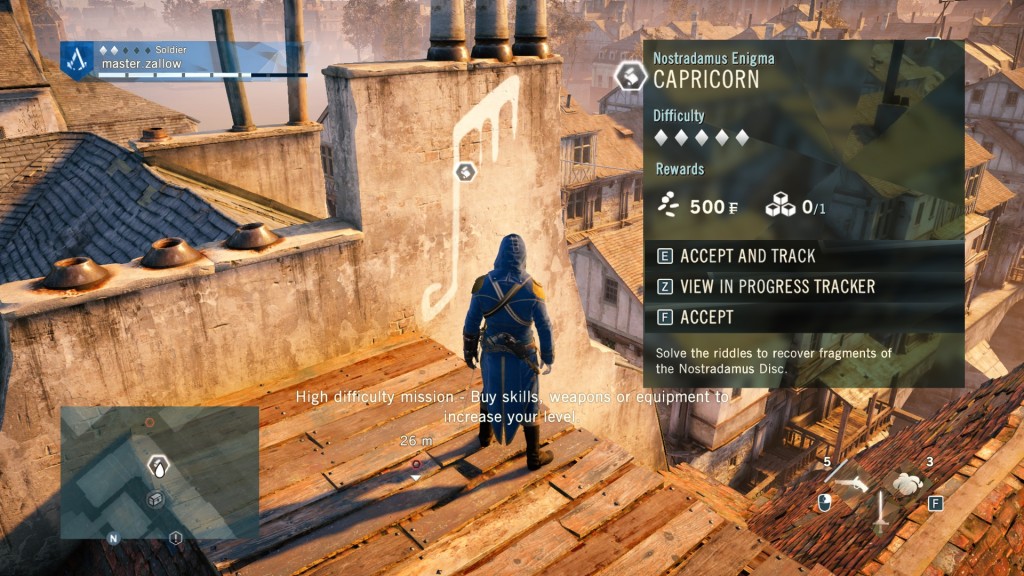 Erudite Rulers of thy façade
Stone-faced before the blood of executions
One day you will quiver and quake
As your insides blaze in fury.

I ventured to a nearby viewpoint before picking up this Enigma mission and along the way I saw that they held executions at a square bellow the viewpoint. I figured that “before the blood of executions” referred to this square and some statues overlooking it. Using Eagle vision I discovered that the building holding the viewpoint also holds the solution to the first Capricorn Enigma riddle.

Song “A ca ira” has the following line “les aristocrates à la lanterne” (aristocrats to the lamp-post). On my way through the square, where the executions are held, I saw a guy hanging from a lamp post. So, I went back and found the solution to the second Capricorn riddle on the ground bellow the hanged man.

Orphan tower, what has become of the rest?
The start of a pilgrim’s journey.
Shreds of memories hang from the chimeras beaks:
This one, pressure of the atmosphere. The other, alchemy.

I had no idea how to solve this one. Google searches returned nothing relevant so I decided to scout all the nearby landmarks. There is a landmark to the northwest of the execution square that has no name and there is a very tall tower there. Upon climbing on top of it and turning my eagle vision I found the solution to the third and final riddle of Capricorn Enigma getting 500 French Livre and one Nostradamus fragment.