Libra Nostradamus Enigma is acquired in the Tuileries district of Le Louvre zone in Assassin’s Creed Unity. It is on top of one of the buildings looking at Tuileries Garden. This garden is located between two in-game landmarks Palais des Tuileries on one side and Place de la Revolution / Concord / Louis XV on the other side. This is a 4/5 difficulty side mission and solving it was no easy task. I had to use in-game database descriptions of various historical landmarks to solve some of the riddles, so I recommend you visit all the nearby landmarks anmd unllock their database entries before attempting to find solutions. 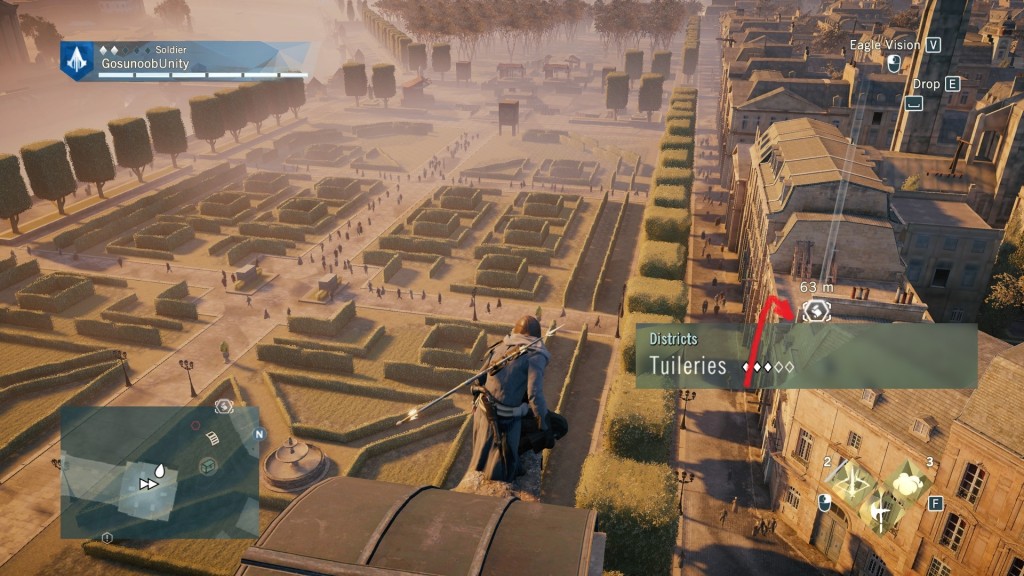 Palace once divided, united by the fourth Henry.
Stone Couples salute their doomed King
For his final walk along the trees,
King once united, divided by People’s will.

If you read the in-game database description of a nearby Palais des Tuileries landmark you’ll find out that this palace was united with Henry IV’s palace Louvre. This solves the first part of the riddle. From the starting location you can also notice two pairs of stone statues above the entrance to the palace. This seemed like a good place to look for the first riddle’s solution. “Along the trees”, on the edges of a large park there are huge lines of trees. Since all clues seemed to fit in climbing Palais des Tuileries looked like a good choice. Climb the stone pillars that hold two pairs of statues and you’ll find the solution to the first Libra riddle.

Last Ray from the Sun
He lost a son and parted from another.
Cobblers, soldiers, statesmen and whoresons,
Cheer the window’s close, blotting out the sun.

This riddle was a bit tricky to solve at first. After the second verse: “He lost a son and parted from another.”, I could safely assume that the riddle is about a person, which in some way is connected with the sun, so it could be Louis XIV or one of his descendants. Cobblers, soldiers, statesmen and whoresons represent a variety of people, which means it’s a location that’s publicly accessible. These people cheer as the window’s close, blotting out the sun, meaning they’re cheering at an event that is destroying (blotting out) something. Connecting a public place with a variety of people, cheering at something bad happening during the French revolution wasn’t too difficult. The only possible explanation would be public executions. I simply connected the dots using wikipedia, that pointed me to Place de la Revolution, as the most famous place where people gathered for executions in Paris (and where Sun King’s descendant, Louis XVI was executed).

The Magdalen looks towards Death
And watches the precession, unblinking,
And thus unmoved, she keeps her back
Toward the Interment of her King.

The final riddle was probably the most easiest to solve. In the first verse the name Magdalen (fr. La Madeleine) is mentioned. English translation is Mary Magdalene, thought of as the second-most important woman in the New Testament after Mary. Each verse describes her actions and as there is only one church in Paris that was named after her it seemed as a decent choice to pay a visit to La Madeleine. I checked around the church, but to no avail. Only after I visited the mausoleum, I found the solution too the third and final Liobra riddle. It is north of where La Madeleine is located.