Rocksteady have just announced the contents of the December update for the Season Pass buyers of Batman: Arkham Knight. It will be released on December 22nd – owners of the Season Pass will be getting it automatically through an update. The rest of us will presumably be able to buy the pieces separately, but we’ll know more once the DLC is released. It will include more Most Wanted missions with villains from previous games. 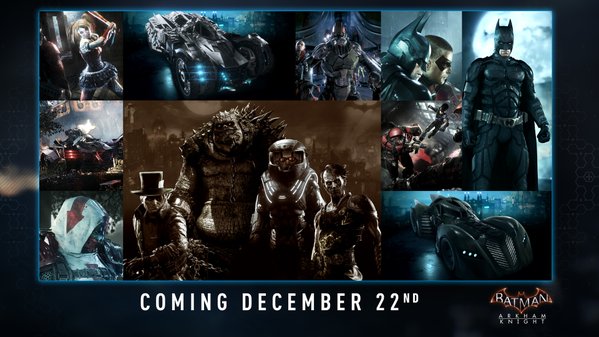 The pack will include the following:Heavier rain is to be included as a free update for everyone as well, although it’s unclear how this will impact the already dodgy performance of the game on PC. Incidentally, PC users are the ones that will be getting the rain update before console players.

PREVIOUS POSTOverwatch Post-launch Heroes and Maps Will Be Free

NEXT POSTNo Open Beta for Uncharted 4