Two-Faced Bandit is one of the most wanted side missions in Batman: Arkham Knight. It involves stopping three bank robberies and arresting Harvey Dent, a.k.a. Two-Face. In this guide, we’re going to show you where to find the banks, how to finish the Two-Faced Bandit side mission and what you’d get for doing it. 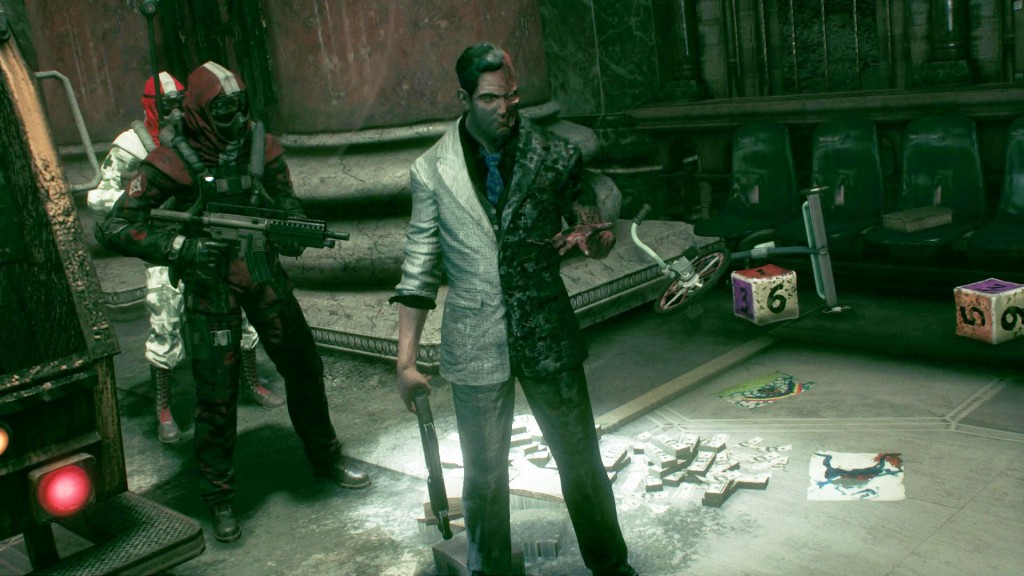 When the alarm sounds off and you go to a bank, you’ll have two options – going in stealthily, or with guns blazing. You can take out the robbers one by one, without having to worry about noise thanks to the alarm. However, if they see you, they’ll cancel the heist and call for backup. In that case, you’ll have to deal with a lot more thugs, and you’ll lose the element of surprise. Each bank is littered with stuff that can be rigged to disable the enemies, like escalators and electrified floors.

When you’ve dealt with the enemies in the third bank, Two-Face will appear. Beat him and his guards, and you’ll get to take him to GCPD. The rewards for finishing the mission include:

Chinatown Bank is the first one you’ll visit, in the western part of Bleake Island. There’s 8 thugs to take care of here, and the time limit isn’t too bad. Use the floor grates and the gargoyles on the wall to perform silent takedowns. You’ll get the concept art for the Hell’s Gate Refuse Truck when you’re done.

Drescher Bank in central Founders’ Island is next on the list. Ten enemies will be waiting for you, provided you don’t let them call for backup. Use the escalators to draw attention and pacify enemies. Defending this bank will unlock the Bank of Gotham concept art.

Finally, the Kingston Bank in the northeastern part of Miagani Island is where you’ll end the mission. Once you defeat the 15 robbers, Two-Face himself will show up with a handful of guards. They’re all going to be carrying rifles, so you can use the smoke pellets and the disruptor to even the odds. The Bank Heist concept art unlock after the third bank.