Cannon is one of the left-hand weapons in Bloodborne. Unlike most firearms, the cannon doesn’t stagger your opponents, but actually does damage – lots of it.
▼Article Continues Below▼
It can be found in the Forbidden Woods area. In this guide, we’ll show you how to find the Cannon, what it looks like and what it does.


The first thing you’ll notice is the high Strength requirement – you need at least 30 to wield it. It uses up 10 Quicksilver Bullets per shot, and deals 200 Blood ATK damage per blast, without modifiers. It only scales with Bloodtinge, although poorly. While it’s impractical to use in regular combat, on account of the high ammo consumption, it’s a nice finisher for boss fights. Taking 400 health off a boss without the need to approach it sounds nice, doesn’t it? 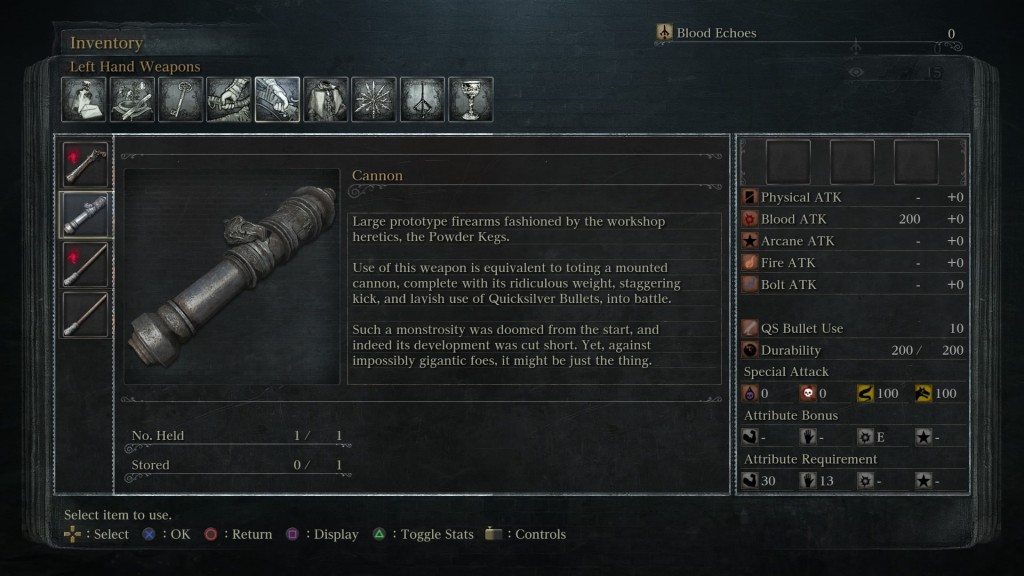 Where To Find The Cannon

Roam around the Forbidden Woods until an enemy starts shooting at you with a cannon.

You’ll find yourself in a giant mill. There are some enemies in the basement, but they won’t notice you.

Watch out for the beast-man down there, he can be hard to spot in time.

The Cannon is on a dead body on that platform. If you decide to use it, keep in mind you can sacrifice health to magically add 5 bullets to your current count by pressing the up button on the D-Pad.