Father Gascoigne is the second boss in Bloodborne (might be the first for you because you might have come across him before Cleric beast). Finding him isn’t that much of a problem, but surviving the traps and ambushes along the way is.
▼Article Continues Below▼
In this guide, we’ll show you where to find him, the best tactics to fight him, and what rewards you’ll get for killing him. We also have information that will help you with other Bloodborne Bosses.

How To Find Father Gascoigne

After spawning in Central Yharnam, go left, down the stairs.

Go down yet another flight of stairs.

Enter the elevator and go for a ride.

Start walking over the bridge. As soon as the group of enemies from the other side starts chasing you, run back and hide near the elevator. A flaming boulder will deal with your pursuers.

Climb yet another staircase.
Now climb the final set of stairs, and meet your new nemesis. 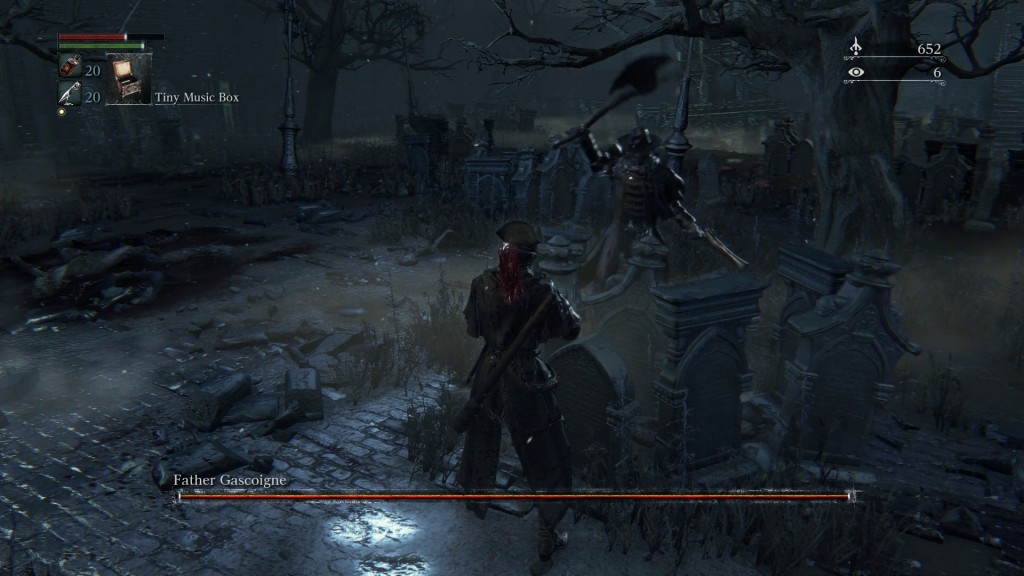 How To Kill Father Gascoigne

You shouldn’t fight Priest Gascoigne withouth the Tiny Music Box. This item helps you stun the boss. You can get it from his daughter – she lives above the sewers. When you come to the mouth of the tunnel with the giant pig in it, climb the ladder out of the sewers. Follow the road – it will lead you to an ogre, guarding another ladder. Once you’ve dealt with the ogre, climb the ladder. The window to your right, the one with the lantern, is where you’ll get the Tiny Music Box.
The priest-gone-beast has three phases – two of them in human form, one as an animal. In the first phase, you should make sure there are some tombstones between you and the boss. He won’t be able to reach you, but you will be able to reach him. Just remember to transform your trick weapons so that it has the best reach possible. Keep hitting him while walking in circles, always making sure he’s on the opposite side of a tombstone.

When his health drops to around sixty percent, he’ll extend his axe, giving him more reach. Your tactic shouldn’t change much – just stay a bit further away, and wait for an opening. He will tire at some point – this is when you bring on the beating. Alternatively, you can use the Tiny Music Box on him to stun him.

At thirty percent health, he’s going to turn into a beast, much faster and smarter than he was before. You won’t be able to hide behind tombstones anymore. Wait for him to throw two consecutive punches, then quickly turn around and smack him. Make use of the Tiny Music Box too – it can stun him for a few seconds, letting you dish out some real damage.

What You Get For Killing Father Gascoigne

The rewards you will be getting are:

NEXT POSTBloodborne bosses, locations, how to defeat them & rewards

With more servers being available to players, there are people that want to know whether…