The Cleric Beast is the first boss you’ll encounter in Bloodborne. He is located in Central Yharnam, but if you’re having trouble finding him, take a look at our guide on How To Get To The Cleric Beast.
▼Article Continues Below▼
He is large and intimidating, but shouldn’t pose too much of a problem, with a little luck and the proper tactics. In this guide, we’ll show you how to defeat him, and what rewards you’ll get for doing that. We also have helpful guides about other Bloodborne Bosses. 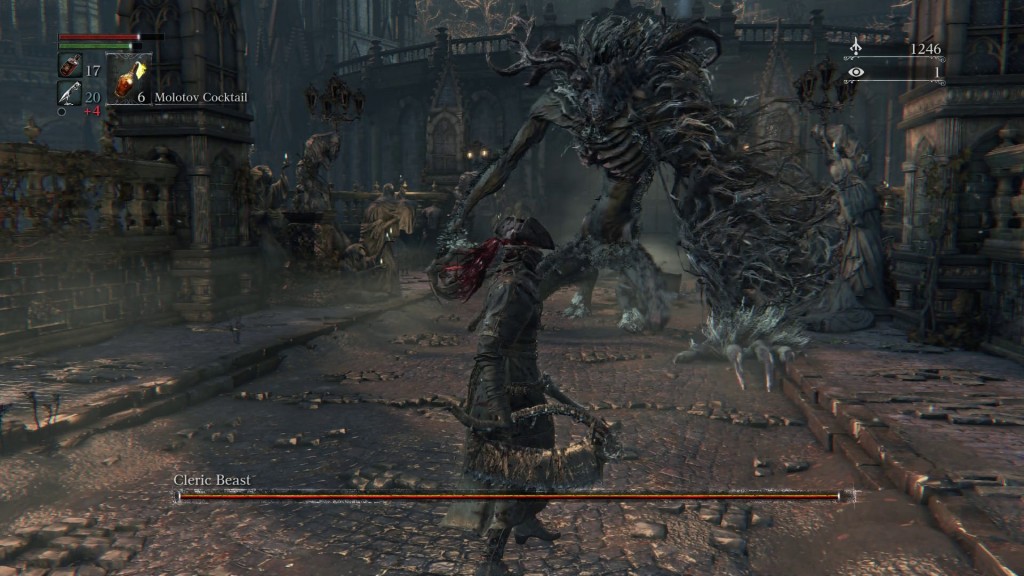 How To Defeat The Cleric Beast

Before you begin the battle, make sure you have 20 Blood Vials, 10 Molotov Cocktails and 20 Bullets on you. Having some Oil Urns would help, as it doubles the amount of damage Molotovs do. There’s no way to buy it yet, but you might stumble upon it. As for Molotov Cocktails – you can buy them for 180 Blood Echoes a piece, but you can only hold up to 10 at a time. You can collect Blood Echoes by killing as many enemies as you can in the beginning of the game.

Right from the beginning, run to the boss and enter melee range. You’re going to notice a pattern – first he swings the weak arm, then the strong one. After that, use the jump attack on him and pull back a bit. He’s going to retreat a little – you should follow him. Keep doing this until he changes his pattern. You need to keep dodging during the entire fight, so be sure to avoid the walls. Sticking to the middle of the bridge is your best bet.

Now, he’s going to swing the weak arm, then thrust the strong one. Try not to get too far away, because that will provoke him to jump at you, which is hard to dodge. At this point, you should start spamming him with Molotov cocktails. If you run out of them, use bullets.

If you manage to sneak in a Molotov while the boss is glowing red, it’s going to make him falter and stumble, putting his head low enough for you to give him a couple of smacks. If you start soon enough, you should be able to sneak in two heavy attacks.

Rewards for killing the Cleric Beast

Defeating him will also unlock the following items in the shop:

PREVIOUS POSTHow to summon friends, play Co-op and get bells in Bloodborne