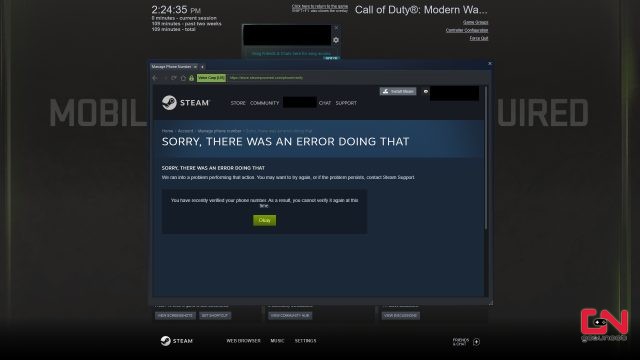 So, you have pre-ordered Call of Duty: Modern Warfare II on PC via Steam. And, you have pre-loaded the game upfront. Now, the time has finally come to enjoy the COD MW2 beta early access, as it is your right by purchase. However, instead of enjoying the game right now, you are stuck verifying your phone number. The Modern Warfare 2 beta requires you to confirm your mobile number via Steam. But you have already done that before and now Steam won’t let you do it again.

The game asks for your phone but Steam won’t let you verify since you already did recently. Seems like a hopeless situation, right? Luckily, there’s a surprisingly easy fix for this! You don’t need to call support or waste your time elsewhere. All you need to do is to remove your phone number from your Steam account, restart Steam, and then add the number again! And that’s it – it’s that easy! Alternatively, you can also do this as a more permanent solution for the Modern Warfare 2 Beta “Steam Verify Phone Number” issue:

You can breathe a sigh of relief now, and go play the game! Oh, and if you encounter the 0x00001338 Error Code, we have a guide for that one as well! With that said, our guide is done!