Are you getting the Modern Warfare 2 Niamey-Lee Error Code? And the message which says “Your data is corrupt or didn’t download properly. You must reset your rank and unlocks to continue.”? You should know that you are not the only one! A new update has arrived in MW2 ahead of its multiplayer launch on October 28th, and it seems that it brings more problems than solutions. PC players suffer from MW2 Dev Error 6036, while PlayStation 5 players don’t know what to do with the Error Code Niamey-Lee. Should you click “Yes” and what will happen with your ranks and unlocks? Read on to find out. 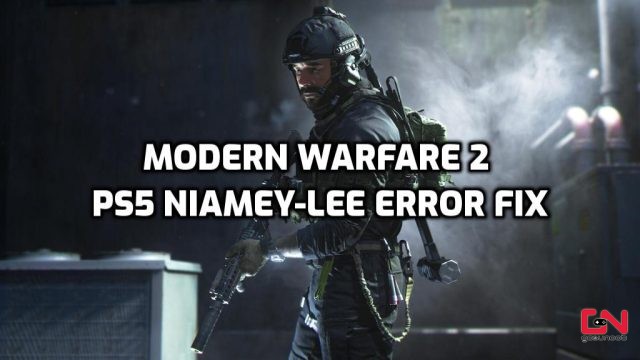 The Error Code Niamey-Lee in Call of Duty Modern Warfare 2 only happens on PlayStation 5 consoles and the PC. It started occurring following the 1.003.000 MW2 update on October 26th. The message that comes with it says: “Your data is corrupt or didn’t download properly. You must reset your rank and unlocks to continue,” and it also asks players to confirm it by pressing yes. Naturally, this has many players worried. Not as much because of ranks, but because they don’t want to lose their unlocks, especially Modern Warfare 2 beta rewards. Worry not. Luckily, this will not happen. While the problem is being fixed by the developers, there’s a temporary workaround for it. Here’s what you need to do:

As the developers explain, “This will trigger a return to the correct menu” and you will be able to play the game again as normal. Hopefully, this will help you with your issues. Also, Infinity Ward confirmed that the Niamey-Lee Error on the PS5 will be fixed with the next update. Have fun playing COD MW2!

PlayStation players encountering a locked game tile or issue accessing campaign early access should open QUICK SETTINGS (options button) — and then back out.

This will trigger a return to the correct menu. This will be addressed in an upcoming update.

Not sure how to get Red Algae in Disney Dreamlight Valley? We’ve got you covered!…

The TFT Set 8 release date and time is coming close, and there’ll be a…

It’s not always fun and games when running the Sugar Gnomes’ Holiday Cake Shop. This…