Not sure how to open the Submarine Doors in MW2 Atomgrad Raid? We’ve got you covered! The very first Call of Duty: Modern Warfare 2 raid is here. Designed as a 3-player co-op experience, Atomgrad Raid will have puzzles that rely heavily on cooperation and communication to progress. Such is the case with the MW2 Raid Code puzzle, which requires players to decipher Russian numbers & the Russian alphabet in order to get the code. Our guide provides a solution for the Atomgrad Raid code puzzle in Modern Warfare 2. 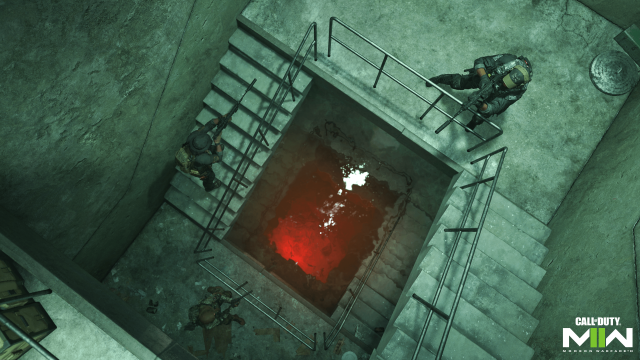 As we already mentioned, the very first Call of Duty raid really puts an emphasis on the co-op part. In order to complete the Atomgrad Raid Episode 1 puzzle, players will need to work together and communicate. This is not advice; this is a requirement. You’ll soon learn that when the MW2 Atomgrad Raid code puzzle appears. Namely, in order to open the Submarine Door, your team will have to enter a 9-digit code consisting of three 3-digit sequences. For that, you’ll need to use the there machines in the control room:

Now comes the co-op part. One player will need to press the big red button on the wall in order for the gate to open and for a teammate to get through and access the surveillance system in the other room. From there, players will need to split roles in order to get the Atomgrad Raid Code and open the Submarine Doors.

Each of the three Russian letters will have a corresponding number on the wall, seen through the Surveillance cameras. The player on the input console will need to enter these matching numbers. Sometimes, the red screen will show more than three Cyrillic letters. That’s by design. You’ll only need the numbers for the three letters displayed on the wall. And one final note – each player must rotate and enter one sequence of the MW2 Raid Code for it to work. Thus, make sure to rotate your roles and allow everyone to enter a 3-digit number in the input console.