Not sure how to “acquire a Basilisk” which is commonly “found in Police Stations” in DMZ? Warzone 2’s DMZ mode offers a variety of interesting missions to complete during your adventure on the Al Mazrah map. MW2’s DMZ is inspired by the popular Escape from Tarkov game but it goes even further when it comes to mission design. In this guide, we explain how to complete the “Badge of Honor” mission in DMZ. Including where to find a Police Station, and where to find the Basilisks pistol in DMZ. 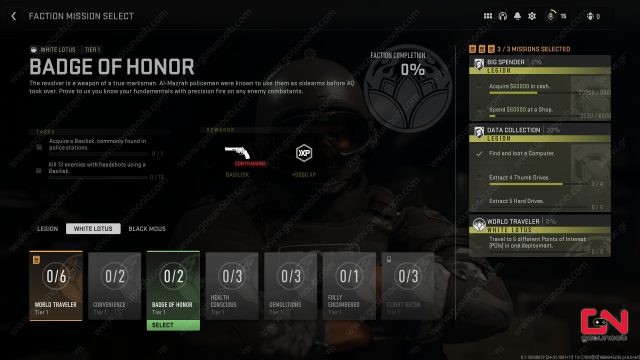 Where to Acquire Basilisk Found in Police Stations DMZ

The “Badge of Honor” mission is one of the Tier 1 missions given by the White Lotus faction in MW2’s DMZ mode. And, it consists of two tasks. The second one is rather straightforward once you complete the first one. It requires you to kill 13 enemies with headshots using a Basilisk. It only requires good skills, but you know what you need to do. Completing the first part, however, is what some players are confused about. That’s because they are not sure about the two steps here. First, they can’t find a police station on a tac-map. Second, often they can not locate the gun.

Thus, when it comes to finding a Police Station on the Al Mazrah map, you will need to look for a white badge icon on your map. You can check out the map below to know exactly what we’re talking about. Once you find the nearest station, head there asap. However, some Police Stations are unlocked, while others are locked. Thus, you’ll need a key to unlock them (random drop).

Eliminate the NPCs first and then look for the Basilisk. However, the pistol will not always be in the same place. Hence, you’ll need to search for it. Sometimes, it will be inside the station building, other times it will be somewhere outside, like in our case here. Thus, make sure to search both inside the station as well as its surroundings. And you’ll eventually find the gun. With that said, our “Acquire Basilisk Found in Police Stations DMZ Warzone 2” guide is completed.