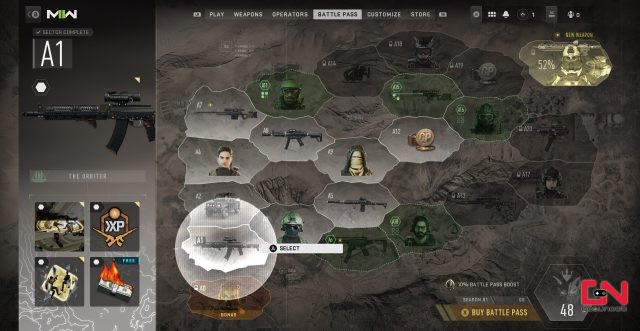 UPDATE: Our reader Astr∅Nick provided the following solution if you play on Xbox: “You have to manually install the content for the battle pass tokens. It isn’t automatic. Go to manage the game, check the boxes for the content and save changes. Take about a min to update.”

The Warzone 2 and MW2 Season 1 Battle Pass introduces a new battle pass system. Unlike the rewards track of previous games, which is how battle passes work in most other games, here we have a “battle map”. Players will be able to spend their Skip Tier tokens on map sectors, where they can unlock up to five different rewards. Asides from the High-Value Target (HVT), which is the main reards of each sector, players can choose the order in which they will unlock four other rewards within that sector. Once a sector is cleared, they can choose any adjacent sector to move there and start unlocking rewards.

Each reward within a Sector requires a Battle Token Tier Skip to unlock. You’ll earn these by simply playing the game or by other means. And when it comes to your “Tier Skips” from the Vault Edition of Modern Warfare II, they are automatically converted to Battle Token Tier Skips. And you can start using them right away! However, some players report that they haven’t received the Tier Skips. If you are one of them, the only solution we know about is to simply restart the game a couple of times until you eventually receive them. Logging in and out of your Activision account could also help with fixing this issue. If this was of no help to you, then we advise you to contact Activision support and explain your problem. Hopefully, they will resolve your issue with missing Vault Edition Tier Skips as soon as possible!

How to Unlock 5 Star Tera Raids Pokemon Scarlet and Violet

The Salamence and Tyranitar Tera raid Pokemon Scarlet and Violet event is coming soon, so…