Why are you receiving the “Purchase Modern Warfare II to Have Access to Everything” message when trying to play free-to-play Warzone 2? We have entered the second day of Warzone 2, and the game is still ripe with issues. The latest glitch has Warzone 2 “not available”. And, asks players to buy Modern Warfare 2 despite Warzone 2 being a free-to-play game. Here’s what we know about it. 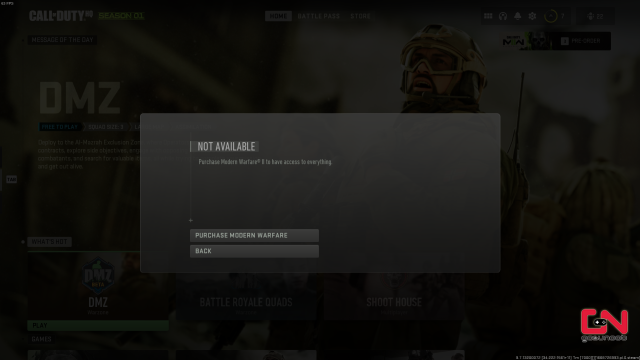 Purchase Modern Warfare II to Have Access to Everything Explained

Update: The issue is now fixed. You should be able to play Warzone 2 and DMZ without being asked to purchase Modern Warfare II. Hopefully, that’s the last time we’ve seen this bug.

Original Story: Don’t worry, Warzone 2 is most likely still free. However, this bug is currently raging across the servers, asking players to buy Call of Duty: Modern Warfare II in order to play Warzone 2 and DMZ. The issue appears to happen across all platforms. Players on Reddit report receiving it on PlayStation, Xbox, Steam, and Battle.net.

“Suddenly the game tells me I need to purchase mw2 to be able to find a match,” says Reddit user Atiustirawa. “Just got this too, the game froze and I had to restart my console and then got that message when I went to play again,” added Reddit user QueenCobalt117. Unfortunately, there’s not much you can do at the moment. This is a server-related issue and it needs to be fixed by the developer with a hotfix as soon as possible. However, what you should not do is buy Modern Warfare 2 just because you want to play Warzone 2 or DMZ. This is not a requirement, Warzone 2 is still a F2P game. For now, we will simply have to wait for Activision to fix the problem.

We will monitor the situation closely and write about any new development. Currently, this is all that we know about the “Warzone 2 Not Available Purchase Modern Warfare II to Have Access to Everything” issue. The developers are yet to acknowledge the problem. Stay tuned for more details soon.