Not sure how to know if you’re shadowbanned in Warzone 2 or Modern Warfare 2? The next generation of Call of Duty games has brought several new layers of security and protection against cheaters. Aside from the ricochet anti-cheat system, there’s also the new shadow ban system. This guide explains how shadowbanning works in MW2 and Warzone 2. 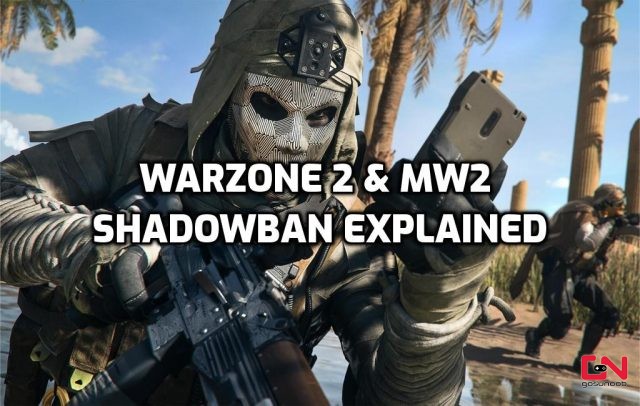 What is a shadow ban in Warzone 2?

Getting Shadowbanned in Warzone 2 & MW2 Explained

Since the release of the original Verdansk Warzone back in March 2020, one of the core grievances of the Call of Duty community was the abundance of cheaters in Warzone. They were ruining the experience for everyone. The cheating never stopped being an issue. At some point, there seemed to be no lobby without a cheater. There were even many esports scandals, with players accusing each other of cheating during major tournaments and events, with tens of thousands of dollars on the line. The ricochet anti-cheat system was the first step by Activision to fight this plague. And now, they have introduced shadowbanning in MW2 and Warzone 2.

How does Shadowban Work in MW2 and Warzone 2

The Shadowban system in MW2 and Warzone 2 works like any other shadow ban feature in other games. So, what is a shadow ban in Warzone 2? When a cheater is reported enough times and established to be a confirmed cheater, the game will not outright ban them from the game. Instead, these players will quietly (without being notified) be placed in a special matchmaking pool with other cheaters. And when they enter a lobby, there will be only other cheaters and hackers inside it. Thus, it will essentially be a hell full of cheaters playing with each other.

This method serves two purposes. It cleans up real lobbies of cheaters so that those who play fair can enjoy the game without hackers. Second, it punishes cheaters by putting them against other cheaters without telling them. This renders their hacks useless, as everyone is hacking there. It also prevents them from making another account, as they don’t know that they are actually banned.

As we already mentioned, the game doesn’t tell you when you get shadowbanned in Warzone or MW2. That’s the whole point. However, some clear signs can help you determine whether you are banned. Below are three clear cues indicating that you’ve probably received a shadow ban in Warzone 2 or Modern Warfare 2. Remember that each of these individually doesn’t mean that you are shadow-banned. But if you are experiencing all three of them simultaneously, that’s likely an MW2 shadow ban. Here’s how Call of Duty shadowban looks like:

If you believe that you’ve been shadowbanned wrongfully and are positive of your innocence, you can submit a ticket for a ban appeal. If your account penalty was indeed a mistake, Activision will reverse your Warzone 2 shadow ban, and you will be back in normal lobbies.