Not sure where to find the Sunken Ship Thief’s Cache in DMZ? As you traverse Al Mazrah in MW2’s DMZ mode, you’ll find all kinds of strange keys to unlock unknown doors and items. And, if you ask us, one of the most mysterious keys is the one unlocking the Thief’s Cache. In this guide, we pinpoint the exact Thief’s Cache location at the Sunken Ship (Dead Man’s Ship) in Warzone 2’s DMZ mode. Also, we talk about the two items found inside – Laminated Paper & the Golden Skull of Al Bagra Minor! 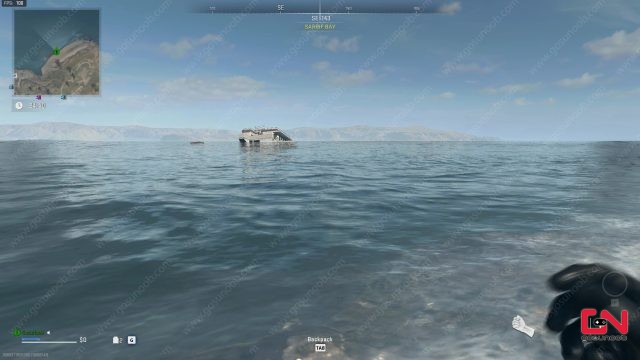 While finding the Captain’s Cache is relatively easy for many players, finding Sunken Ship Thief’s Cache is a much more challenging task for many. Just in case you don’t know, the Sunken Ship is located at the very south of the map in between Sawah Village and Sarrif Bay, offshore near the giant oil tanker which has beached itself there. The Thief’s Cache key is on a desk at the Post Office, as the Captain’s Log note suggests. The log says that it was stolen by “a worker dressed in some sort of a postal uniform”. In order to reach the Sunken Ship Thief’s Cache key, you’ll need the Downtown Post Office Key and the Post Office Secure Room key. Once you have the key, here’s where you will need to go.

Position yourself around 10-15 meters to the west of the ship. Check our image below for the exact location. From there, dive straight toward the ship. Soon you’ll spot a huge crack in the sunken ship’s hull. Again, see our image so that you know what we are talking about. Enter the ship’s lower floor through that hole. And immediately to the right of the entrance, you’ll see the Thief’s Cache! Now simply use your key and unlock it. Keep in mind that you’ll need to be quick when doing this, lest you’ll drown due to the lack of oxygen. Inside you’ll find Laminated Paper and the Golden Skull of Al Bagra Minor.

For now, we don’t know much about these two items found in Thief’s Cache. The Laminated Sheet of Paper says that the Golden Skull of Al Bagra Minor is not like other Golden Skulls. There are some “glyphs along the outside” which make the skull unique and “especially valuable” (it’s worth $25,000). Given the name, it probably has something to do with the Al Bagra fortress. If you know more about it, please share it with us in the comments section! And of course, we will make sure to update the article once we know more. For now, that’s all we know about the Sunken Ship Thief’s Cache and the Golden Skull of Al Bagra Minor.

Bloxburg Elf Hunt 2022, Where is the elf in Bloxburg

The Cookie Run Kingdom Stories by the Fireplace v3.10 update is here! Among many awesome…