Pickup is one of the jobs in Cyberpunk 2077. It’s the one where you and Jackie go to a Maelstrom hideout in order to get a Flathead bot for Dexter DeShawn. There’s a whole bunch of choices to be made during it, starting from whether or not you’ll talk to the Militech agent beforehand, what kind of deal you’ll strike with her. Then there’s the conversation with Dum Dum, in which you can goad or calm down Jackie, and finally, the approach you take when talking to Royce. If you’re wondering what the consequences of these choices are, our Cyberpunk 2077 Pickup choices guide will shows you what happens in every scenario.

Meredith Stout choices – take chip or not from Militech agent

The meeting with the Militech agent is an optional objective, but there’s no reason to avoid it and several to actually attend it. The first few choices in the conversation with Meredith Stout are largely for roleplaying purposes – she’ll know when you’re lying, and her disposition won’t change. It doesn’t matter whether you choose “All by my lonesome” or “Got backup” 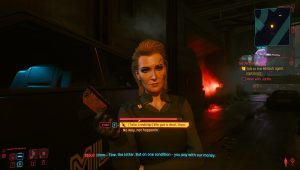 The one choice that does make a difference in the long run is whether you take the chip she offers or not. There’s no reason to refuse. Taking the chip will allow you to align yourself with her when the time comes, and you’ll be able to keep the money for yourself if you play your cards right.

Now that you have the chip, you can either leave it at that, or you can hack it using the breach matrix software. This way, you’ll find out there’s malware on it, and you’ll be able to wipe it clean, which unlocks other options further down the line. On the other hand, not messing with the chip also has its advantages, but more on that in a bit.

Dum Dum choices – tell Jackie to sit or not

Once you’ve reached the meat packing plant, you’ll be greeted by a guy named Dum Dum. He’ll get on Jackie’s nerves right from the start, and the only real choice you have there is whether to calm Jackie down when the situation starts to escalate, or let it all go to hell. 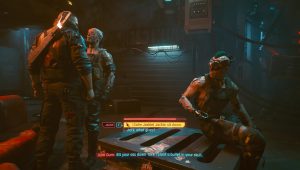 If you tell Jackie to sit down, he’ll calm and you’ll start chatting with Dum Dum. He’ll bring out the bot and show it to you. You can do some drugs, ask about them if you’re a street kid, talk about the bot’s control system if you have high enough tech and so on. Eventually, Royce will come out of his hovel and take over from Dum Dum.

However, if you let the situation escalate, you can start blasting right away. Once you’ve murdered everyone, you’ll have to find the case with the bot – it’s in the room to the left, by the red neon sign. The downside here is that you’ll miss out on a bunch of flavorful convo, and you’ll have to fight Royce in his boss form.

Royce isn’t all that interested in talking – he’ll pull a gun on you as soon as he enters the scene. What he is interested in is getting more money. He’ll ask you to pay him again – you won’t be able to wiggle your way out of it, or get a discount, so don’t even bother asking. 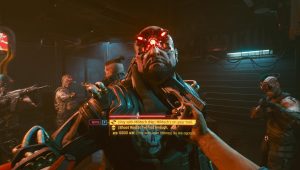 Your first real choice is whether to overpower Royce physically or put a gun to his head. You need a certain amount of strength for the first one, so it might be off the table. Once you’ve got his undivided attention, you can either pay with your own money, shoot him right then and there, or pay with the Militech shard.

Paying with your own money offers no benefits whatsoever, except maybe a clean conscience. Shooting him will make the Maelstrom guys attack you, but once the fight is over you’ll be able to grab the bot, the Chaos iconic weapon from Royce, and you get to keep the Militech Shard.

Once you’re out, Meredith will congratulate you and say that future jobs from her corp are on the horizon.

Pay with Militech chip (without virus)

If you’ve hacked the Militech chip you got from Meredith, you can pay with it and warn Royce that the corp is on his tail. He’ll check the chip, thank you for the info and Militech will attack soon after. They’ll be gunning for you as well, and you’ll have to fight through a bunch of their agents.

You’ll also have to deal with a couple of seriously beefed-up drones, which can drop some rare upgrade materials. Dum Dum will give you his s-keef inhaler, and once you’re out, Gilchrist will be there – the guy from Stout’s trunk. He’s not happy you shot at his men, but he’s happy to be alive, which probably wouldn’t have happened if you followed Stout’s instructions.

Pay with Militech chip (with virus)

If you leave the datashard alone and pay with it, it’ll mess with the Maelstrom’s infrastructure. They won’t be happy about it, and you’ll have to fight them. Royce will be waiting for you in the loading bay, in his mini-mech, with a shield and everything. If you’re wondering how to defeat Royce in his boss form, all you have to do is scan him – this will reveal his weak points.

Once he’s down, you’ll be able to get the Chaos pistol from him. When you leave, Meredith will be waiting outside. You can scold her for tricking you, but it’s no use in the grand scheme of things – if you’re nice to her, she’ll offer you more work down the line.

Morality aside, the best way to play through the Pickup job is to talk to Meredith and get the chip, then hack it. Remove the protection, then head into the plant. Calm Jackie down when he starts going at it with Dum Dum, then pull the gun on Royce and shoot him on the spot.

You’ll end up with the Militech credit chip all to yourself (which has a tidy sum on it), Royce’s fancy weapon and jacket (without having to actually fight him), and Meredith Stout as a potential client.