Desert Pyromancer armor set is an outfit in Dark Souls 3. It was added in the Ringed City DLC. It provides great protection against elemental damage, poison and curse, but it’s weak against physical damage. It’s also extremely revealing. In this guide, we’re going to show you how to get Dark Souls 3 Desert Pyromancer Armor, what it looks like and its stats.

The whole set can be found in the Earthen Peak Ruins area. The garb (chest piece) is hidden behind a hut in the upper part of the area, near the bonfire. It’s one of the wooden houses under the angel, closest to the cliff edge.

For the hood, you’ll have to go to the other side of the swamp. Climb the root all the way on the left. Near the end, jump onto another root on your right. Keep climbing, then go left into the cave. You’ll have to fight a desert pyromancer NPC here (or simply run past her). Follow the ledge until you reach more giant roots at the end – the hood will be on a dead body there.

Garb of the desert pyromancers, who once walked the halls of the Earthen Peak. It is said that the thin burgundy cloth breathes with magic.

Desert pyromancers, most of them female, were known for their great fans of flame, and enchanting looks. But what is enchanting can also be deadly, especially when clothed in such alluring garb. 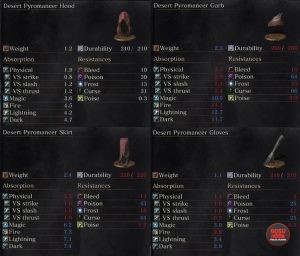