Area: Road of Sacrifices Closest bonfire: Keep Ruins How to get: Spawn at the Keep Ruins and go back, away from the giant stone door. Walk down to the swamp and head beyond the stone tower. You’ll shortly see two inclines rising out of the swamp. The one on the left has a corpse near the top. The sword is on that corpse.

Description:
This ultra greatsword, with its thick blade, is one of the heaviest of its kind. Highly descructive if intolerably heavy. There would appear to be some credence to the rumors that this sword tested the true limits of human strength.
Skill: Stomp 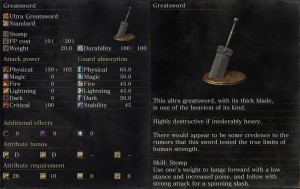 Some consider this to be the best ultra greatsword in the game. It does 159 physical damage and starts of with D in both strength and dexterity scaling. You’ll need a minimum of 28 STR and 10 DEX to use it without issues. The low speed of the swings means you’ll have to time your attacks perfectly, but when you land them, it’ll be devastating.