Chiral crystals are a type of crafting material in Death Stranding. They’re jagged, golden, hand-shaped rocks. At first, you won’t be able to collect them – when you discover them with your scanner, the game will tell you that you need a special device to store them. Since they can be found pretty much everywhere, you’re probably wondering how to collect chiral crystals in Death Stranding. You’re in the right place – this guide will show you exactly that.

How to collect chiral crystals

In order to collect them, you’ll need a special device. It’s called a crystal collector, and you’ll get one for free during Order No.8 – Collection: Chiral Crystals. That’s one of the missions in chapter 2. You’ll get the container at the beginning of the mission, which will then lead you through the process of collecting the crystals.

Use the scanner once you’re outside to reveal nearby deposits. They’re marked with a little blue hand. Heartman will tell you they usually appear in rainy areas, and that nearby rocks tend to float above the ground. Once you’ve collected enough, you’ll return to the distribution center for the rest of your tutorial. 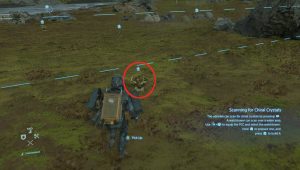 Interact with the terminal and choose the option to recycle. Select the crystals from the list, and Sam will pour them into the terminal. They’ll be processed there, and you’ll be able to pick them back up by using the Claim Materials option.

They’re just your run of the mill crafting ingredients, basically. You might think otherwise when you first encounter them, because you won’t be able to collect them right away, but they’re pretty basic stuff. Once you unlock the collector thingy, you’ll soon be drowning in them. Use them wisely, though – you never know how your luck might turn at any moment. It’d be awful if you were left stranded, without any crystals, in this harsh land.