Deathloop is out, and while the PlayStation 5 version is working as intended, the PC version is another thing entirely – with frequent game crashing, bad FPS, stuttering, and general poor performance. While many of these issues will probably be addressed in a future patch, PC players are asking if there is anything they can do on their end to fix the game and get it running. So, in this Deathloop PC Performance Fixes – Game Crashing, Bad FPS, Stuttering guide, we will explore all the things you can try to improve how Deathloop runs on your PC. 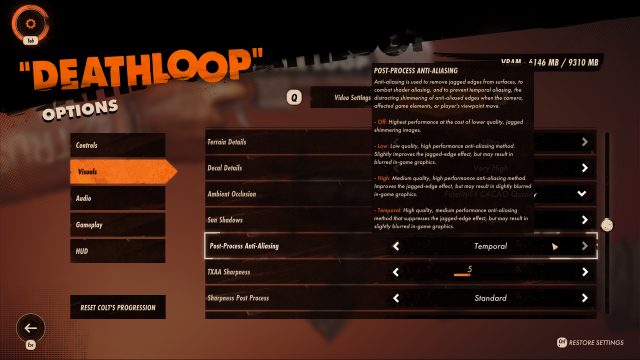 How To Improve Deathloop PC Performance

Currently, there are several methods you can try out to improve your Deathloop performance. Some of these are graphics options that should be turned down low – or turned off altogether – and others are more unconventional solutions. With that said, let’s dive right into it.

Several big visual bugs occur when you have V-Sync on. Besides the bug in the screenshot below, where your weapon will get blurred when you walk, there is also the issue of the text messages that Colt has left for himself around the world constantly flickering. Turning V-Sync off fixes both of these issues. If you get screen tearing after turning off V-Sync, go to the Nvidia Control Panel. Once there, go into the 3D Graphics Setting tab, choose per program settings, select Deathloop in the dropdown, find the V-Sync setting and force it through that way. You can do the same thing through AMD Radeon Software if you have an AMD GPU instead.

You can also use RTSS Frame Limiter to limit FPS in Deathloop. This application allows you to set the FPS limit in your games. Instead of the in-game FPS limiter, you can use RTSS Frame Limiter instead. Cap it to 60 FPS and you should be good to go. One more thing – in RTSS’ Application Detection Level, make sure not to set it to High. If you do, the game will crash. Instead, set it either to Medium or any other lower setting, and it should work as intended. 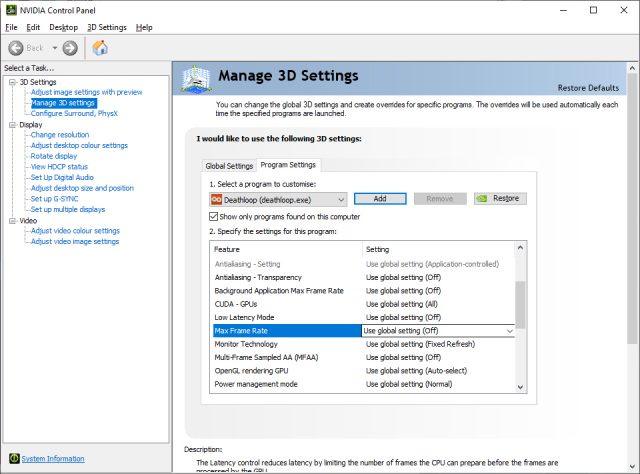 TAA is short for Temporal anti-aliasing, and you will want to switch to AMD FidelityFX Super Resolution (FSR) instead. This gives a very noticeable and immediate boost to FPS. Even better, FSR works on both AMD and Nvidia cards.

Besides FSR, lowering shadow details to Very Low provided us with the biggest positive impact to performance and a big FPS gain.

On lower-end GPUs, it has been reported that completely turning off Motion Blur helps with getting more FPS. Also, the Motion Blur effect in Deathloop looks very visually “busy” and off-putting, which is another good reason for turning and keeping it off.

Do this if your framerate is very low. If it is already high enough, you likely won’t get that big of a benefit from turning it off. This trade off between performance and personal gaming preferences also depends on how much you enjoy the DoF effect in your First-Person Shooters.

While the mouse + keyboard combo allows for greater precision, it seems that many players have been getting an input lag from their mouse. When they used a controller instead, this seemed to improve their smoothness of play. If you are having problems with mouse lag, you can try and hook up a controller instead, to see if this will help you.

A tried and true method for many performance issues. To update your AMD graphics card, go to this link. And if you have an Nvidia GPU, go here.

Finally, here’s a complete list of the system requirements for playing Deathloop. If you don’t meet the minimum specs for playing it, then it’s very probable that these solutions won’t do much to help you.

Deathloop minimum system requirements (This should get you 1080p / 30fps with settings set to Low):

Deathloop recommended system requirements (This should get you 1080p / 60fps with settings set to High):

Deathloop Ultra 4K system requirements (This should get you 4K / 60fps with settings set to Ultra):

NEXT POSTFind the Release Mechanism for the Barrier Tales of Arise