If you got The Dark Below and wanted to do the weekly Heroic and Nightfall right away you might have noticed that you are locked out of those two. Turns out you will have to do some quests for Eris Morn first!
▼Article Continues Below▼
It is not just one or two quests either. You will have to go through this long quest chain to be able to run your weeklies and reap rewards. I believe this is Bungie’s way of making you actually see the new content before you start rep and gear farming. Guide bellow will give you some pointers on what to do and where to do it.

You will first have to complete a quest chain consisting of three tasks: Fist of Crota, Siege of the Warmind and The Wakening. After this you will get a legendary fusion rifle – Murmur and a chance to get two more quests from Eris. Here’s a short overview of the first three tasks:

Description: Defeat the Fist of Crota leading the Spawn in the Cosmodrome.
This is a pretty short mission. You’ll first face several waves of Thralls and exploding Thralls accompanied by some Knights and Omnigul, Will of Crota wizard/witch (this guy will run away once you take down its shield and do a little damage to him). Afterwards follow the mission marker and you’ll get a chance to kill Blade of Crota – a hive Knight major, who drops a sword when killed. Pick up the sword and use it on enemies. You can easily complete the Let’s dance bounty here. When you reach The Grottos Sardon, Fist of Crota will spawn. He constantly casts a medium range AOE attack that does a lot of damage and you are prevented from double jumping so I suggest you constantly run around in circles around the arena while shooting at the boss to get him down. Overall a short fight.

2. Siege of the Warmind

Description: Find Rasputin’s bunker. Defend it against the Hive attack. Defend Rasputin in the “Siege of the Warmind” mission on Earth
In the second Eris quest – Siege of the Warmind – you have to prevent Crota’s agents from finding Rasputin. You will go to Forgotten Shores and enter Rasputin’s inner sanctum. End event of the mission consists of surviving three waves of progressively more numerous hive (consisting of thralls, knights and wizards). I would suggest to have some solar damage weapons for killing the wizards and just stay away from the green circles on the ground. After those three waves you will have to kill the end boss Ogre, which will complete the mission.

Description: Go to the Temple on the Moon and destroy Crota’s soul.
Time to go back to the moon and Hellmouth. As you make your way through Thralls and Knights you will get to the chamber with Wizards summoning Crota’s soul. There is a lot of room for movement here so use that to your advantage as you dispose of the three wizards and occasional waves of regular and exploding thralls. Blast your heavy weapons and grenades at the soul of Crota once it becomes active.

You will now be able to collect two new quests from Eris. One quest requires you to purchase something from Xur (you will have to wait until Friday for this, but you don’t need it for unlocking the Strikes) and the second quest, The Extermination, requires you to defeat Hive Knights and Wizards.

Description: Defeat Hive Knights and Wizards, then bring proof of their demise to Eris.
There are several ways to do this. You can go do some old missions on the moon, but I recommend helping your friend or someone doing the first three Dark Bellow story missions. These have a lot of knights and wizards for you to kill. Siege of the Warmind story mission is on Earth and The Wakening is on the moon and both have plenty of knights and wizards for you to kill.

After you are done with The Extermination bounty/quest you will get three new missions. These are interesting because they require you to scout Earth for locations of special mobs that, once killed, complete the quests.

Description: Patrol the Terrestrial Complex in the Cosmodrome. Steal the Servant’s treasure and lure out his masters. Terrestrial Complex is on Earth. Go into patrol of the Earth and go to Forgotten Shores (from where you spawn on Earth go left and go through Mothyards and there is a road along a small stream that takes you north into Forgotten Shore). Once you reach that zone go left and follow the road uphill until you enter a building complex. This is the Terrestrial Complex you are after. Go through it until you reach an open space (and where story mission The Last Array has its finale) and you will find Servant of the Eyes NPC there guarding an urn. Kill it and interact with the urn and this will bring about a hive dropship from which Eyes of Crota will drop. After you kill them all you will complete this quest.

Description: Patrol the Lunar Complex in Cosmodrome. Seek out the Servant of the Hand to lure out its master.
This one is pretty easy to find. You’ll find him in a chamber where first Thralls spawn in The Dark Within story mission. From where you spawn on Earth go west through Mothyards and go west up a small path into a building. That is the Lunar complex and if you just follow the path through it you are bound to come across Servant of the Hand who, once killed, spawns Hand of Crota. This guy will constantly spawn thralls (thralls everywhere) so make sure you kill it ASAP or you will have to deal with a million minions.

Description: Hunt and kill Omnigul in the Will of Crota strike on Earth.
This is pretty self explanatory so get some friends and run a new strike in The Dark Bellow.

Last step also unlocks the Weekly Nightfall/Heroic for the first week of the Dark Bellow’s release. You can go do the strike on regular (level 26) to acquaint yourself with the encounter and get rewards for the final quest step (I got a legendary Titan mark and I presume other classes get their own cosmetic item). 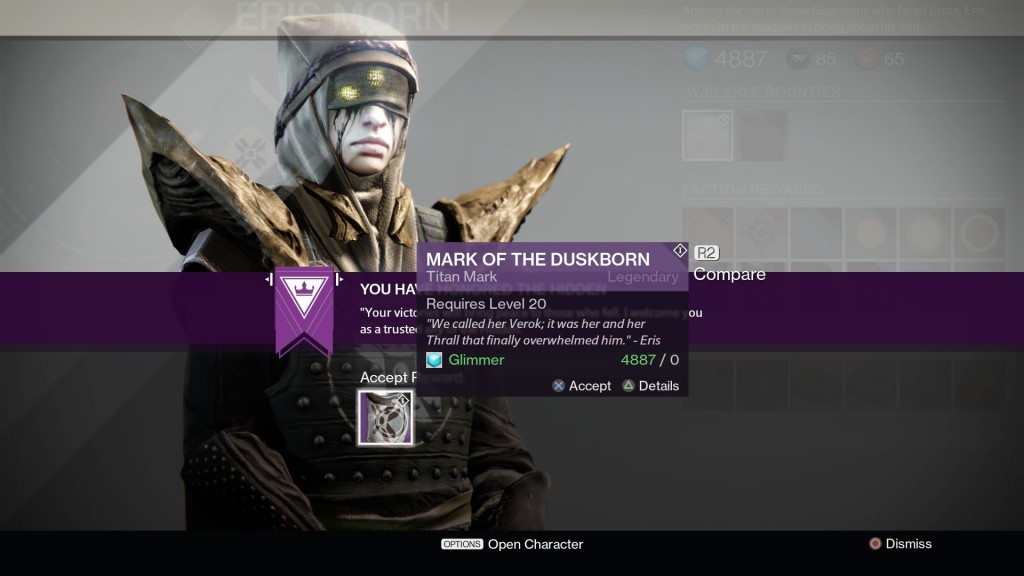 PREVIOUS POSTDestiny guide – How to get Murmur from Eris Morn

NEXT POSTDestiny Eyes, Hand and Heart of Crota locations