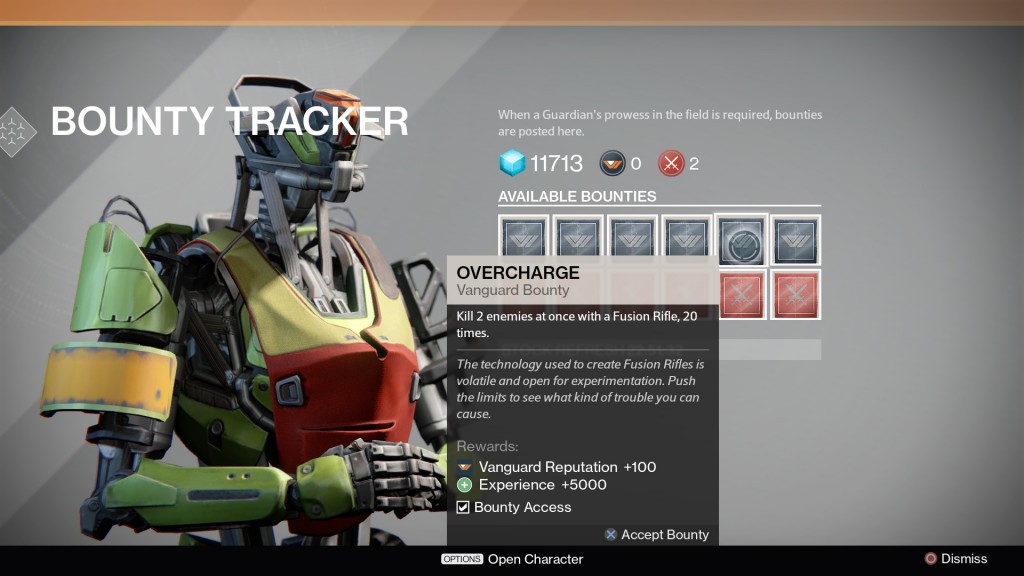 In Destiny you can pick up these side tasks called bounties that reward Vanguard reputation and Experience. One of the bounties is called Overcharge and it says to:

Kill 2 enemies at once with a Fusion Rifle, 20 times

When I first got this bounty and tried killing two enemies with a single shot from a fusion rifle (Fusion Rifles are your secondary weapon, just like shotguns and sniper rifles) I failed miserably. Then I failed again and again until I dropped the bounty in favor of something more manageable.

Turns out this is really not that hard to do. What you need is a bunch of enemies spawning all at the same time and charging at you. I chose to visit Earth and do third mission The Dark Within. During this mission, once you enter the darkness zone and just before fighting the Wizard, you will be charged at by a group of Thralls. Just shoot these thralls with your fusion rifle and you should get 20 double kills in no time. You might have to die on purpose a few times because this mission in particular does not have enough Thralls to complete the whole bounty. You just let the Wizard get you and respawn at the beginning and continue killing Thralls with your Fusion rifle.

TIPS: You can get another bounty (like Relic Harvest – Cosmodrome) that requires you to kill enemies on Earth so you complete two bounties at the same time. Other good locations for farming the Overcharge bounty are a mission on the Moon where you first go to Temple of Crota or during the Devil’s Lair Strike. People also mentioned Forgotten shore has a bunch of enemies clumped together behind the first ship. Thanks to this thread on reddit for the tips