Once you unlock the Helliquary during the main Bilefen questline in Diablo Immortal, one of the first boss raids you’ll need to complete is against Chaos Herald Pyl. The Helliquary opens up the ability for players to join forces and take on powerful demon bosses. Defeating them will yield plentiful rewards, namely their Demonic Remains and the rare material Scoria. Alas, you’ll encounter a few bugs right out of the gate. If Chaos Herald Pyl doesn’t spawn or Chaos Herald Pyl remains are nowhere to be found, here’s what we know about this bug. 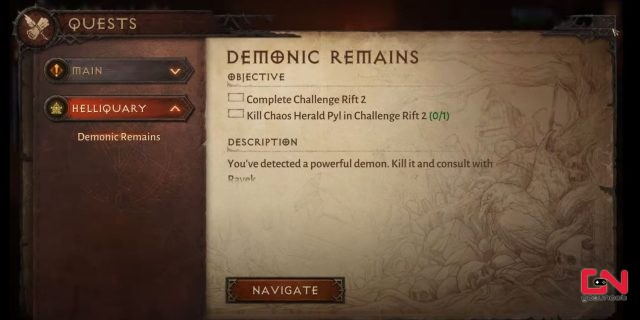 You’ve finally gained access to the Helliquary and are ready to start making progress. Unluckily, you don’t know where to find Chaos Herald Pyl, as he simply doesn’t appear. No matter how many times you try. Well, you are not the only one with this issue. It seems that many players don’t know how to summon Chaos Herald Pyl in Challenge Rift.

This is understandably frustrating as you need to kill him to progress the “Demonic Remains” in Diablo Immortal. But how to fight Chaos Herald Pyl, what do you need to do? There is no definitive answer to this problem, as it seems that there’s no clear pattern of when he shows up at the moment. What most players suggest is that you need to do it Solo (try various levels). Numerous players report that when you switch to solo, the quest will work and Chaos Herald Pyl will show up. So, the most likely answer to your problem here is the solo challenge.

On the other hand, there’s another bug with Chaos Herald Pyl in the Demonic Remains quest. Even when he shows up and you finally defeat him, for many players he simply doesn’t drop his remains. Unfortunately, unlike the spawning issues, this one is a currently unsolvable bug. If Chaos Herald Pyl remains don’t drop, you won’t be able to progress the quest. Many other players are encountering this bug, Blizzard is probably well aware of it. For now, we will have to wait for a hotfix that will remove this game-breaking issue.