Diablo Immortal is now live! Being an action MMORPG, one of the core gameplay elements in Diablo Immortal is co-op play. You can play the whole campaign in co-op, or just specific missions and dungeons. For that, you can make a party and add other players, either friends or randoms online. Warbands are one of the new social features in Diablo Immortal, which allow players to create small groups and clear dungeons. In order to unlock the Warband Camp, you’ll need to complete the “Establish Warband Camp” quest. This requires you to slay 10,000 monsters in the campgrounds. However, for many players, the monsters kill count doesn’t track the monsters you’ve killed for the Warband Camp. Here’s how to fix this. 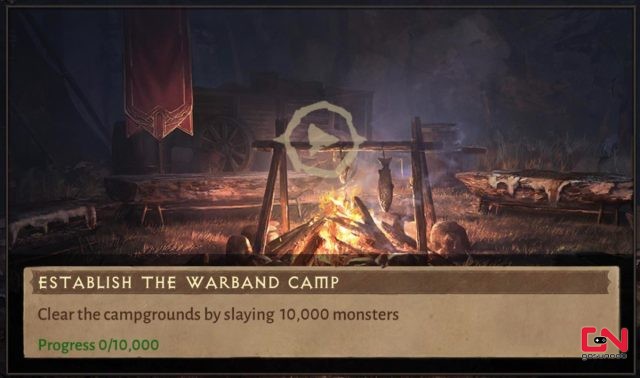 How to unlock Warband Camp in Diablo Immortal?

For players to unlock their Warband Camp, they will first need to clear the campgrounds. This is no small feat, as it will task you with slaying a sizable amount of monsters. Exactly ten thousand of them, to be more precise. Thus it can be quite frustrating when you start grinding the quest, only to realize that the quest is not counting the monsters you’ve killed.

Why are monsters not counting for the “Establish Warband Camp” quest in Diablo Immortal? Well, the good news is this is not a bug, just a poorly explained quest. In order to start counting monsters, it is required for you to be in a Party with at least one other member of the Warband. Only when you are in a party with your fellow Warband members, monster kills in the campgrounds will count towards the 10,000 monster progress. The quest really needs to be clearer in this regard, as many players are confused by it. Anyway, just slay those monsters with another Warband member in your party, and the quest will start counting monsters towards unlocking the Warband Camp.

NEXT POSTHow to Remove Chat Box from Screen Diablo Immortal