Like every Diablo game before it, Diablo Immortal also has plenty of stats. If you want to truly master the game, you will need to have a complete understanding of what each of these does and how it affects your character. These include obvious stats such as Armor and Critical Hit Chance, but also some other stats whose purpose isn’t all that clear. Potency falls squarely in this latter category. What does Potency actually affect in the game? Is it important, or can you safely ignore it? Well, in this guide, we are going to take a look at Potency in Diablo Immortal and have it explained. 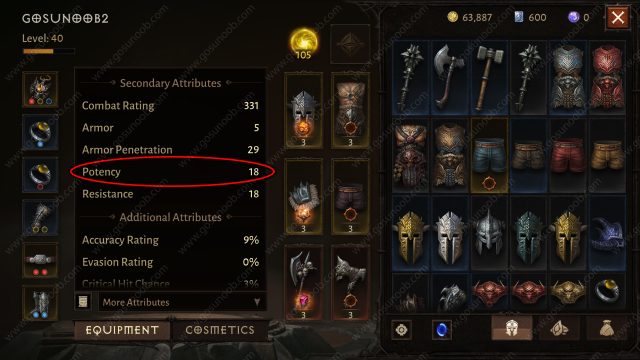 What is Potency in Diablo Immortal

In terms of Diablo Immortal’s stats, Potency refers to the strength of the debuffs that you inflict upon enemies. These enemies include both regular mobs (and bosses), as well as other players. Its primary use is through Crowd Control abilities. When you cast one of these abilities on an enemy, you are comparing your Potency against their Resistance to see which one is stronger. If your Potency is particularly strong (or an enemy’s Resistance particularly low), you can gain up to +99% in duration against mobs and up to +50% against players. You can raise your Potency via Willpower and Paragon abilities.

If you use a lot of CC abilities, then investing in raising your Potency is very much worth it. This will allow you to prolong the harmful effects that you cause (such as Stun, Chill, and Slow) so that you can take out enemies more effectively. On the other hand, if you don’t use many crowd control abilities, then it’s better if you concentrate on improving your Resistance instead. If you are interested in more Diablo Immortal guides and similar content, we invite you to check out our Diablo Immortal archives.

PREVIOUS POSTNi No Kuni Aroma of Focus Use