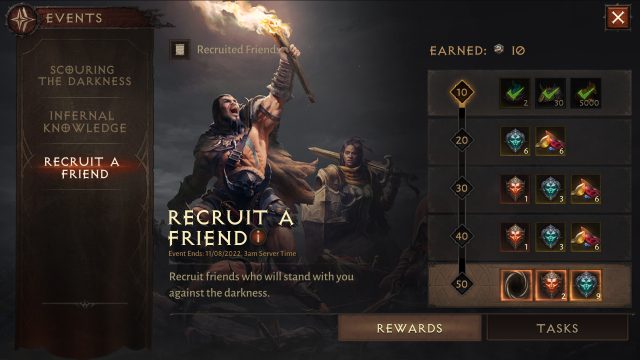 How to Recruit A Friend in Diablo Immortal – All Requirements

Unfortunately, the friend-recruiting feature will not be a permanent one. At least for now. It has been added as a part of the Halloween update in Diablo Immortal. Thus, it will only be available starting from October 12th at 3 am server time, until November 8th, at 3 am server time. However, that doesn’t mean that you can’t take the most of it while it’s here. So, how to recruit a friend? For starters, you’ll need to fulfil a couple of requirements. Here’s how to do it:

All Recruit A Friend Rewards in Diablo Immortal

Of course, this whole system would be meaningless without some juicy rewards for both the recruiter and the recruited. For every player you successfully recruit, you and they will be able to unlock a host of in-game goodies. Below, we list all the Diablo Immortal Recruit A Friend rewards: