Conflict is one of the organized PvP activities in The Division 2. This means it plays out in isolation, away from the usual dangers of the Dark Zone. Imagine it as a premeditated romp between two groups of agents. Who’s the bad guy? Well, not you, surely. It must be the other team. A lot of players don’t know how to fire up a game, which is why we’ve written this guide, to show you how to start Conflict mode in Division 2.

How to play Conflict?

There are two ways to start a Conflict match. You can go to the guy in the picture above, the one in the improvised command center under the stairs to the right of the White House’s entrance. Talk to him, and he’ll offer to organize a skirmish. If you’re already tired of running around and just want to get on with it (spoilsport), you can also do it via a menu option.

When you open up the map, you’ll see a bunch of icons in the top left corner. You can use these to access various menus (use Q and E on PC, and presumably RB/LB or R1/L1 on console, to scroll through them). The second icon from the left is the Confict menu. Simply press the appropriate button once you’re there (it’s Space on PC and most probably A/X on console), and the game will thrust you into the matchmaking queue. 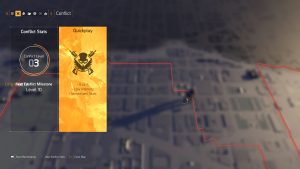 This screen can also be used to track your overall Conflict progress, stats and how far away you are from the next milestone. Conflict is closer to a regular multiplayer shooter – if you prefer that to the tense and unpredictable action that takes place in the Dark Zone proper, then this is where you are supposed to be.

PREVIOUS POSTDivision 2 How to Play with Friends & Invite to Group