Internal justification for every DLC for any game in existence probably goes like this: “If you still want more of this, you want it spiced, right?”. Players who completed Doom Eternal most certainly don’t want Palm Springs vacation simulator with Doom Slayer sunbathing, but do they want the terror they got with The Ancient Gods – Part One? I’m sure lots of them do, but…

Heavy “but” coming your way. The first campaign DLC for Doom Eternal is much, much more difficult than the original game. It’s so much more difficult it’s not even funny, at least for the first few struggling hours laced with swearing and heavy breathing. This DLC is spiced all right, but instead of a bit of extra curry, it got sprinkled with liquid evil. 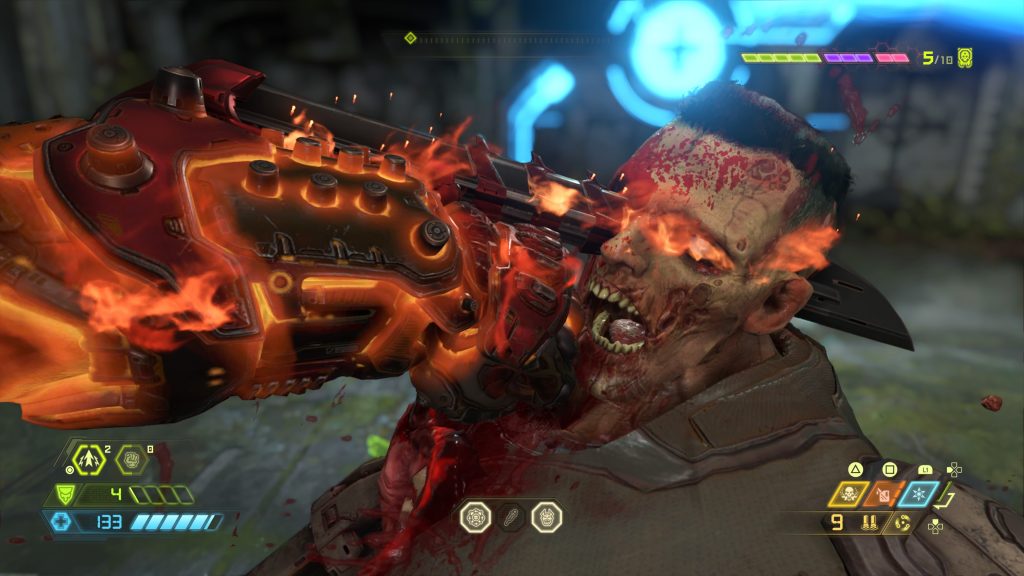 My perfect storm of unpreparedness factored in long abstinence from Doom Eternal – after I completed the campaign in the eve of lockdown era, I dabbled a bit in multiplayer, but pretty soon got bored and moved on. Muscle memory faded and neural pathways self-optimized for some different game. Then The Ancient Gods descended and immediately judged me unworthy. My second mistake was opting to play the original game on a console instead of a PC: re-learning the difficult game played with a controller is probably like struggling to walk on prosthetics in the first year after the accident. It took one whole agonizing evening for me to stop getting destroyed on basic difficulty.

Doom Eternal: The Ancient Gods – Part One starts immediately after the conclusion of the base campaign. Lore got complicated at this point, but suffice to say that Evil cannot be fully obliterated without further excursion in demon-infested levels where you’ll get important thingamajigs of supernatural origin. I’m still not fully on board with this much oral and written fantasy in the game like Doom – “aliens from hell go kill ’em Tiger” was perfectly fine, but someone important raised hand in the Bethesda overlords board meeting and here we are… 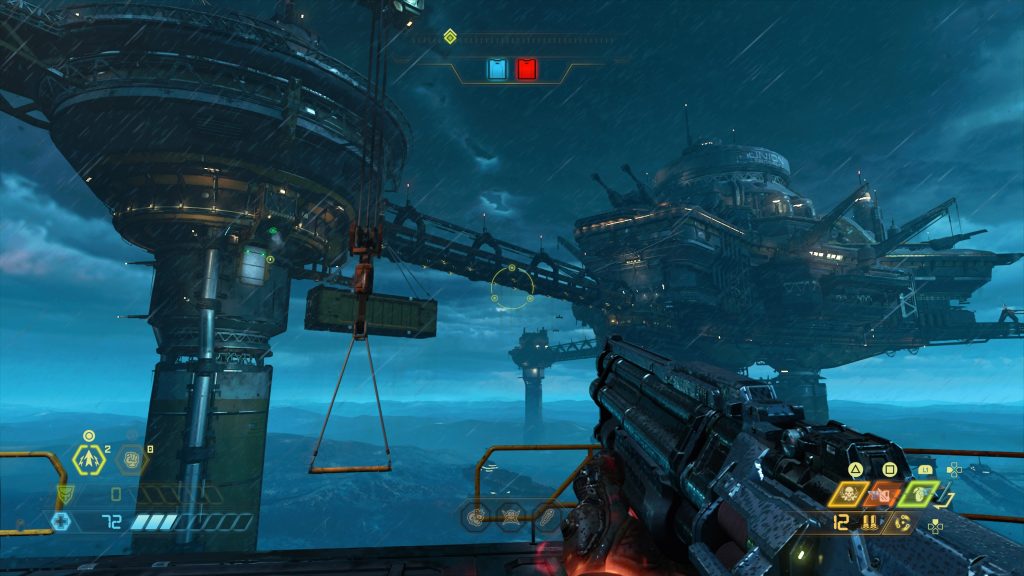 This DLC is difficult mostly because the intensity of combat set-pieces is dialed to twelve. Dispatching wave after wave of demons is demanding physical work as you cannot afford to stop and catch your breath even for a quarter of a second. “You stop-you die” rule in the design document has been repeatedly underlined with red ink. The most annoying enemy from the original game is back with for the brutal encore – shield-wielding Marauders, super-demons immune to special weapons and invulnerable except in a split-second window when they swing at you, are aplenty. You will fight two at the same time on a few occasions, in case you started to feel comfortable with just one. 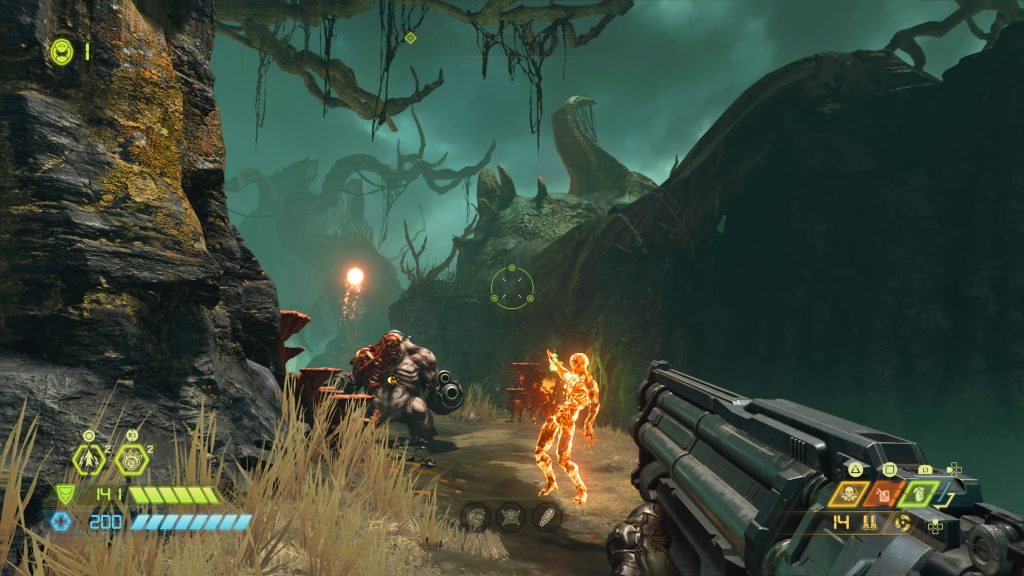 Then there are the pop-up turrets which were probably designed by the bored son of Sauron – they have mini eye-like canon on top of the pillar that descends into the base structure if you aim at it for too long. They shoot at you when you turn your back on them, but after you decide to blast them to pieces they plop down, probably with silent MWAHAHAHAA, ready to hose you again when you set your sights on something else. Marquis de Sade, is that you laughing from hell? Or was that Caligula? Let’s not forget mega tentacles, elder siblings of those reasonably sized feelers from base Doom Eternal, which will terrorize you on the demonic swamp level. But by far the most annoying new adversary is the Spirit which possesses enemies, making them stronger, deadlier, and harder to kill. If you eliminate its host, Spirit will simply possess another demon unless it’s dispatched with a plasma rifle beam or if there is no one else to haunt. 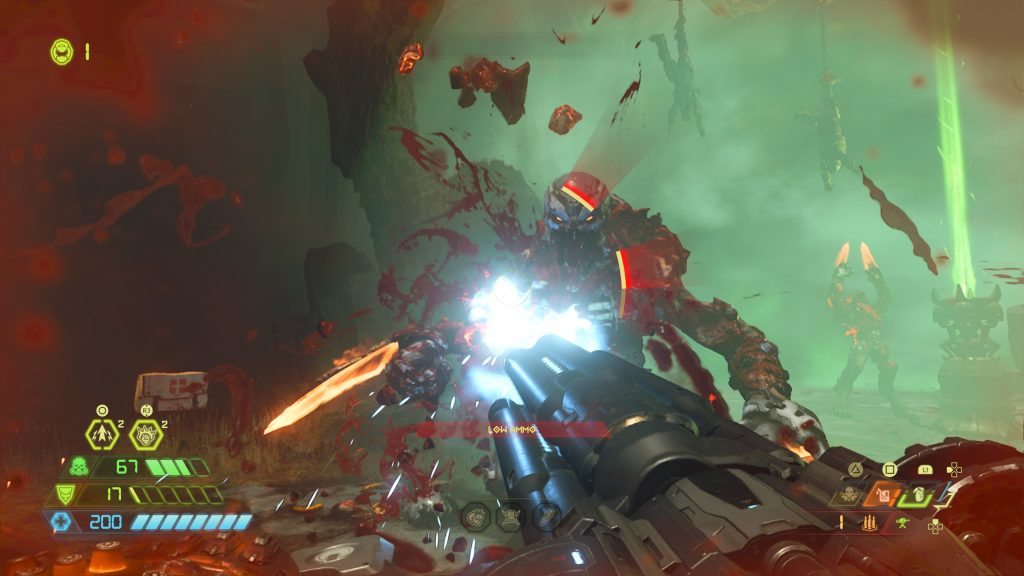 Doom Eternal: The Ancient Gods – Part One consists of three massive levels that require lots of patience and determination. There is very little filler material here as they are compressed and stacked with Evil that will repeatedly overwhelm you. I really can’t remember SOOO much reloading, trial and error from any game I played in the last decade. Things got a little bit comfortable only when I took a coward’s way out and lowered the difficulty to the “I’m too young to die” setting. Lowest of the low, but still quite brutal. Platforming is back with a vengeance too, and some of those acrobatic sections are spiced up with the pressing need to figure out the really perfect sequence of double jumps and dashes, timed in accordance with some environmental factor, like cargo container suspended on a cable, set in motion after the bullet fired in the green switch. Prince of Persia in the world of demons, no less. 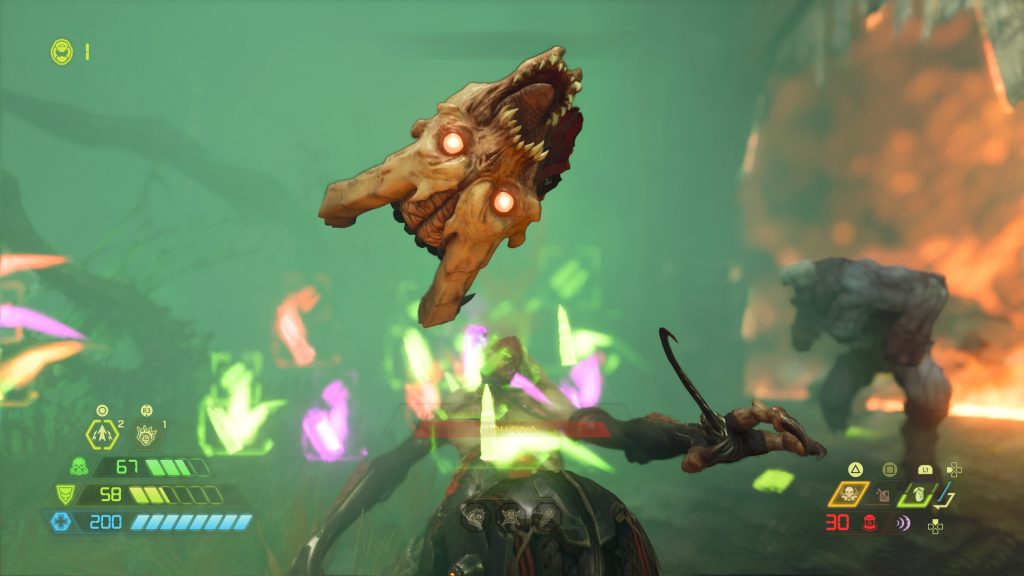 If you still want more of this, you want it spiced, right? You should definitely ask yourself this question before you pull the trigger on Doom Eternal: The Ancient Gods – Part One. This DLC is not for the faint-hearted casuals – it demands persistence, practice, and a strong anti-quitting attitude. If you complete it on reasonable difficulty, you should 3D print Slayer’s helmet and wear it as a substitute for a surgical mask. Without shame.