Dying Light 2 Cheers quest is one of the earlies in the game that will present you with an important choice. Here, you will track down Marco the water trader, and it will turn out that he was selling poisoned water and now needs your help in covering this up. You can either agree to make a deal with Marco and frame Julian, or to tell the truth and save Julian instead. But, which is the better choice? In this Dying Light 2 Cheers Quest choice guide, we’ll tell you what happens if you save Julian or Marco and hopefully help you select the best result. 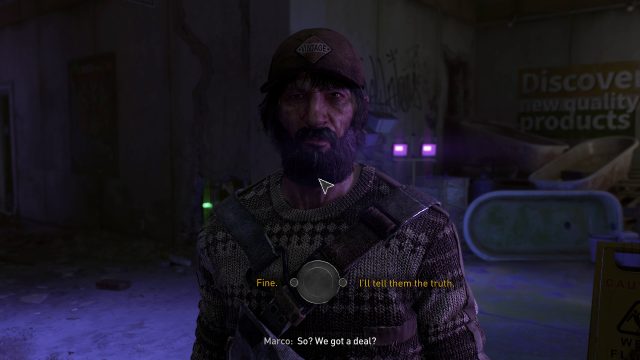 When you catch up to Marco, he will explain the entire situation, claiming that he accidentally sold the poisoned water to Julian. He will offer to buy you off if you lie and testify against Julian. To do this, in the conversation with Marco, first select the white “But what about Julian?” dialogue option. As you know, the white dialogue options only give you more information, they’re not choices in themselves. The actual choice “Fine.” will appear after that. Select this, and he will reward you with 250 Credits and x5 Flour.

When you go back to Julian, you will get two possible answers. The white choice “What’s in it for me?” will result in Aiden unsuccessfully trying to get more money out of the situation. The yellow “The supplier’s water was clean.” will result in Julian getting hauled away to answer for his alleged crimes. The consequence of accepting Marco’s deal is that Julian is no longer going to be available in the game and Dying Light 2 Cheers quest ends.

If you select the “I’ll tell them the truth.” choice, Marco will be very displeased to hear that you are not willing to help him. In fact, he will be so upset that he will attack you. After killing Marco, go back to Julian. You will have the “What’s in it for me?” white choice and “The water from the supplier was tainted.” yellow choice. Regardless of which one you select, Aiden will explain that Marco was responsible for the poisoned water. Julian has now been found innocent, and he will remain in the game. The consequence is that Marco is now dead. Personally, we’d go with this choice. After all, Marco is responsible for poisoning the water, and it’s not right that an innocent Julian should take the blame for that. Marco doesn’t appear in the game later as a special vendor so his disappearance is of no consequence to the player. Dying Light 2 Cheers side quest is the real representative of what this game is all about. Many of the choices will remove NPCs permanently from your playthrough.