Two (or more) groups of survivors fighting over dwindling resources is a very common trope in post-apocalyptic media. As such, it’s no wonder that it also features heavily in Dying Light 2. Of course, with its branching narrative and system of choices and consequences, DL2 puts its own spin on this theme. In the early part of the game, you will be presented with a major choice – whom to assign the water tower to. You can either Assign the Water Tower to Peacekeepers or Survivors. In this guide, we will discuss the consequences of both of these choices, so you know which decision is most suited to your personal ethics and playstyle. 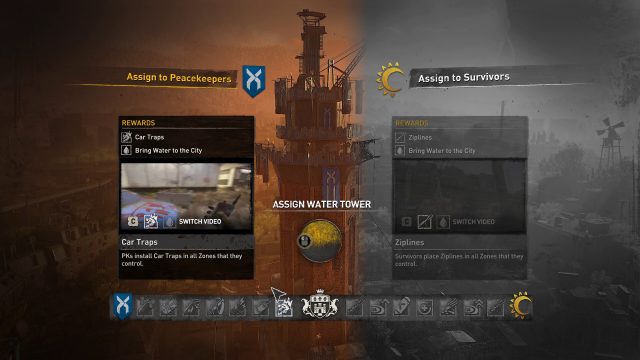 While the game frames this as a really important choice, whatever you choose here will result in the City getting water. That isn’t to say that it doesn’t matter who you will assign the Water Tower to, just that this particular choice won’t result in a part of the story getting blocked off. The way it functions is like this – when you assign a structure (like the Water Tower) to Peacekeepers or Survivors, this affects several things.

First off, the faction that you assign these to will start controlling that zone. Due to this, they will provide various bonuses to you. Generally, the Peacekeepers will give you more combat-oriented bonuses, while the Survivors will provide more movement-based bonuses. There are seven upgrades per faction and you can pick and choose as you like. Note, however, that if you are an Achievement hunter, you will need to assign all seven facilities to one faction to get the “Bootlicker” Achievement.

Basically, it all boils down to story and playstyle considerations. While both the Peacekeepers and Survivors have their fair share of problems, neither faction is bad – they are both populated mostly by good people trying to make the best out of a desperate situation. So you won’t be “wrong” no matter which side you choose to support. But if this isn’t too important to you and you prefer to focus on the gameplay side of things – then assign the Water Tower according to which bonuses you like better. If you prefer combat solutions, then the Peacekeepers are the way to go. And if you like to ease and enhance your movement across the City, then go with Survivors.